Sixty-one-year-old Alex Ewing was convicted Aug. 6 of first-degree murder after a two-day trial in which prosecutors contended Ewing used a hammer and a knife to kill Bruce Bennett, 27, his wife, Debra, 26, and daughter Melissa in the Bennetts’ home. Melissa Bennett also was raped, prosecutors said. 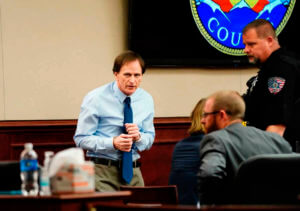 Another daughter, 3-year-old Vanessa, was beaten in the head with a hammer as were her parents and sister but survived the attack.

Ewing is also charged with the hammer killing of Patricia Louise Smith, 50, in her home in suburban Lakewood about a week before the Aurora killings. Smith also was sexually assaulted. Ewing’s trial in that case is set for October.

Arapahoe County District Court Judge Darren Vahle told Ewing on Tuesday that the crimes Ewing was convicted of were the worst he had seen in a quarter-century of practicing law, The Aurora Sentinel reported.

Ewing was identified as a suspect in 2018 through DNA evidence while in imprisoned in Nevada, where he was convicted of attacking a couple in the Las Vegas suburb of Henderson in 1984 with an ax handle in their bedroom. The results of a DNA sample taken from Ewing were linked with DNA developed years later from evidence taken from the scenes of the Colorado killings.

Bruce Bennett’s mother, Connie Bennett, 87, asked the judge for the maximum sentence. She had testified that she discovered her son’s bloody body inside the home after her son and his wife did not show up for work.

“Some people may call him an animal,” she said of Ewing. “But I won’t because I think animals have a purpose in this world.”