MINNEAPOLIS (AP) — The defense attorney for the former Minneapolis police officer convicted of murder in the death of George Floyd is seeking not only a new trial but also a hearing to “impeach the verdict” by investigating potential juror misconduct.

Eric Nelson’s request for a new trial for Derek Chauvin is fairly routine, but the request to investigate the jury is not. Prosecutors have until Wednesday to submit written arguments in response to Nelson’s requests. It’s not clear when the judge will rule.

Here’s a look at some of the issues Nelson raised. 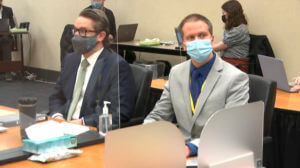 Chauvin was convicted in April of second-degree unintentional murder, third-degree murder and manslaughter in the May 25, 2020, death of Floyd, a Black man who was pinned to the ground for about 9 ½ minutes as he said he couldn’t breathe. Chauvin will be sentenced June 25.

Nelson’s request for a new trial covers everything from the extensive publicity of the case to allegations of prosecutorial misconduct, arguing the state “belittled” Nelson’s defense by calling his arguments “stories.”

He takes issue with the fact that records weren’t made of sidebar discussions between attorneys and the judge, and he says the court abused its discretion by not allowing a man who was with Floyd on the day he died to testify. He also takes issue with the addition of a third-degree murder charge and with the state’s cumulative evidence about the use of force.

Nelson alleges all of these factors deprived Chauvin of his right to a fair trial.

“It’s almost as if Eric is sort of repackaging all of the major objections he made throughout the trial into one brief and putting them back in front of (Judge Peter) Cahill one more time and asking him to reconsider,” said Brock Hunter, a Minneapolis defense attorney who has followed the case.

It’s unlikely a new trial will be granted. Since Cahill already ruled on most of these issues, Hunter and other experts said he probably won’t overturn himself. Still, experts say, Nelson has to try. He also has to present these issues in the trial court, if he wants to raise them on appeal.

“He’s zealously representing his client, as we are ethically bound to do,” Hunter said.

Nelson said intense publicity — both before the trial and due to events during it — tainted the jury pool and prejudiced the jury against his client.

There were reports in February that Chauvin had been prepared to plead guilty to third-degree murder, an announcement during jury selection that Minneapolis reached a $27 million settlement with Floyd’s family, and the fatal shooting of Daunte Wright by a police officer in nearby Brooklyn Center, which happened during Chauvin’s trial and sparked days of protests.

Nelson said Cahill abused his discretion when he denied earlier requests to move the trial out of Hennepin County, postpone the trial and sequester the jury.

Ryan Pacyga, another Minneapolis defense attorney following the case, called the developments that came up during Chauvin’s trial a “perfect storm” and said the cumulative impact is worth noting. He said Nelson’s strongest argument may be that the case should have been delayed.

“If I were to think about any of those things happening in a case where I was defending somebody, I would be going crazy and have serious concerns about the impact — either perceived or real — on a fair trial,” Pacyga said.

REQUEST TO IMPEACH THE VERDICT

The term “impeach” in this context means to call into question the integrity or validity of a jury’s verdict.

Under Minnesota’s Rules of Criminal Procedure, a defendant can ask the court for a hearing to investigate possible juror misconduct. The hearing, known as a Schwartz hearing, gets its name from a 1960 Minnesota Supreme Court case that set up a procedure for examining jurors when their impartiality is questioned.

The case, Schwartz v. Minneapolis Suburban Bus Co., stemmed from an automobile accident. One of the jurors said during jury questioning that he could be fair and impartial, without disclosing that his daughter had been in an accident. According to text of the ruling published on casetext.com, there was dispute about whether he was asked a question about that during jury selection.

After the trial, an investigator for the defendant bus company interviewed the juror and learned about the accident; the juror told the investigator it influenced him to somewhat favor the plaintiffs.

To avoid having attorneys or investigators “harass” jurors by interrogating them, the Minnesota Supreme Court said if a juror’s untruthful answers to questions could prevent someone from getting a fair trial, it’s best to bring the matter before the trial judge. The juror may be summoned to court to answer questions.

No. Pacyga said that’s mainly because the judge and attorneys don’t usually know about issues like this unless they’re disclosed somehow. He said the defense has a high bar to overcome to get a Schwartz hearing, and prevailing in one is even tougher.

In Chauvin’s case, Nelson alleges an alternate juror, who did not deliberate, made public comments after the trial indicating she felt pressured to render a guilty verdict.

He also alleged that a juror who did deliberate, Brandon Mitchell, didn’t follow jury instructions and was not candid during jury selection because he didn’t mention his participation in an Aug. 28 march in Washington, D.C., to honor Martin Luther King Jr. Nelson also alleged Mitchell made comments indicating he based his verdict on outside influence.

Hunter said he expects the state will say Mitchell wasn’t untruthful and that the march wasn’t specifically about police brutality. Hunter noted Mitchell said during jury selection that he supported the Black Lives Matter concept.

“He wasn’t really trying to be evasive or hide the ball about where his viewpoints were during jury selection,” Hunter said.