CHICAGO (AP) — Federal prosecutors this week scored multiple convictions against R. Kelly at the singer’s trial in Chicago, but they lost on the headline charge — that Kelly obstructed justice by rigging his 2008 state child pornography trial, at which jurors acquitted him.

Kelly co-defendant and longtime business manager Derrel McDavid was also acquitted on the same count, as well as three other charges. 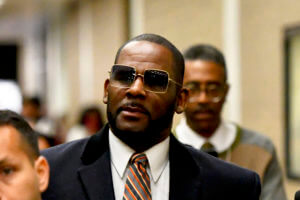 FILE – Musician R. Kelly, center, leaves the Daley Center after a hearing in his child support case on May 8, 2019, in Chicago. Closing arguments are scheduled Monday, Sept. 12, 2022 for R. Kelly and two co-defendants in the R&B singer’s trial on federal charges of trial-fixing, child pornography and enticing minors for sex, with jury deliberations to follow. (AP Photo/Matt Marton, File)

After the verdict, U.S. Attorney John Lausch expressed disappointment in not winning convictions across the board. But he said Kelly was still looking at a prison sentence of 10 to 90 years. He said he was pleased Kelly was “finally being held accountable.”

Sentencing is set for Feb. 23. Kelly, 55, is already serving a 30-year prison term imposed by a federal judge in New York for racketeering and sex trafficking.

At least one legal expert said obstruction of justice charges aren’t generally hard to prove. “But in this case,” said Phil Turner, a former federal prosecutor in Chicago, “the facts just weren’t there.”

Here’s a look at the trial-fixing charge:

WHAT DID PROSECUTORS ALLEGE?

The claim was that Kelly and McDavid conspired to ensure key witnesses at the 2008 trial would lie about Kelly’s sexual abuse of girls and refuse to testify. 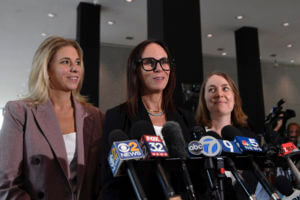 They offered six — and in at least one case seven — figure payoffs in cash for the return of videos, which prosecutors said they knew would lead to a conviction in 2008.

The conspirators, said prosecutors, applied particular pressure on a girl — now 37 and referred to in federal court as “Jane” — and her parents. State and federal prosecutors said she was the girl Kelly is seen sexually abusing on a VHS tape that was at the heart of the 2008 trial.

DID THE PRESSURE WORK?

Prosecutors said it did.

Jane and her parents said they lied to a grand jury in the early 2000s about Kelly’s sexual abuse, and they didn’t testify at the 2008 trial. Jurors at that trial said they had no choice but to acquit Kelly because the victim did not testify. 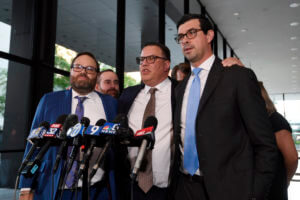 Derrel McDavid, center, stands with his attorney’s Vadim Glozman, right, and Beau Brindley, left, at the Dirksen Federal Courthouse in Chicago after verdicts were reached in R. Kelly’s trial, Wednesday, Sept. 14, 2022, in Chicago. Kelly associates Derrel McDavid and Milton Brown were co-defendants at the Chicago trial. Jurors acquitted McDavid, a longtime Kelly business manager, who was accused of conspiring with Kelly to rig the 2008 trial. Brown, a Kelly associate for years, was acquitted of receiving child pornography. (AP Photo/Matt Marton)

“That jury was scammed. They were scammed by Robert Kelly and his fixers,” prosecutor Jeannice Appenteng told jurors this week, using Kelly’s given first name.

Federal prosecutors said the payoffs that started in the early 2000s included funding trips by Jane and her parents to the Bahamas and Cancun, Mexico.

Critically to their theory of the case, federal prosecutors also alleged Kelly intermittently paid Jane’s rent — by then in her 30s — until just several years ago to ensure she kept quiet.

WHAT WERE SOME OF THE CHALLENGES FOR PROSECUTORS?

Steps Kelly and others allegedly took to fix the 2008 trial happened two decades ago, so memories of how the purported crime unfolded have dimmed. At least four men who may have had direct knowledge of what happened have since died.

Among them was Jane’s father, who died a year ago.

For the child pornography count, the evidence included video that jurors saw. On enticement, they heard directly from Kelly accusers — Jane, Nia, Pauline and Tracy. One of the enticement counts they didn’t convict him on was related to an accuser who did not testify.

WHAT WITNESSES DID PROSECUTORS CALL?

Their star witness was Jane.

On the stand, she said publicly for the first time that she was the girl in the video at the center of both the federal trial and the trial 14 years ago. She said she was 14 in the video and that the man was Kelly, who would have been around 30. 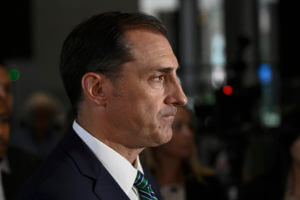 John R. Lausch, Jr., United States Attorney for the Northern District of Illinois, speaks at the Dirksen Federal Courthouse in Chicago after verdicts were reached in R. Kelly’s trial, Wednesday, Sept. 14, 2022, in Chicago. A federal jury on Wednesday convicted R. Kelly of several child pornography and sex abuse charges in his hometown of Chicago, delivering another legal blow to a singer who used to be one of the biggest R&B stars in the world. (AP Photo/Matt Marton)

She testified she lied to a state grand jury in 2002 when she said that it was not her. She said she wanted to protect Kelly, and added: “I also did not want that person to be me. … I was ashamed.”

Jane’s mother, who went by “Susan,” also testified. She said she lied to the state grand jury, in part because she and her husband felt threatened by Kelly and feared for their lives.

Susan said she, her husband and Kelly cried as the parents confronted Kelly about sexually abusing their daughter. While asking for forgiveness, she said Kelly also said: “You are either with us or against us.”

She took Kelly’s words as a threat. “We were very, very frightened,” she said.

Another key witness was Kelly’s ex-girlfriend Lisa Van Allen. She told jurors she stole a sex video around 2000 from a gym bag Kelly had that was full of such recordings on a rare occasion when he left it unattended.

Van Allen said McDavid told her in 2007 that she should have been killed for all the trouble she caused Kelly.

WHAT DID DEFENSE LAWYERS TELL JURORS?

They repeatedly attacked the credibility of the government’s main witnesses, noting that most testified with immunity, including Jane, her mom and Van Allen.

“They came in here to tell the government’s version of the truth,” Bonjean, Kelly’s lawyer, said.

Kelly’s payments for Jane’s rent, what they were for and how long they lasted was critical to deciding guilt on the trial-fixing charge.

That’s because the federal statute of limitation says someone can’t be charged with such a conspiracy if it ceased within five years of an indictment.

Kelly and McDavid were indicted on that and other charges in 2019. So prosecutors had to show the conspiracy ran up to at least 2014. The rent payments to Jane after 2014, they say, was part of the continuous conspiracy.

Attorneys for Kelly and McDavid balked at the claim that the rent payments were hush money. They noted that Kelly remained friendly with Jane and her parents for many years after the 2008 trial. Jane testified, too, that she cared deeply for Kelly at least until his 2019 indictment.

Defense lawyers argued that, even if there ever was a conspiracy, it didn’t last beyond 2014.

WHAT WERE SOME OF OTHER ARGUMENTS?

For example, they said Kelly’s remark to Jane’s parents that “you are either with us or against us” could have meant any number of things — not only that Kelly would hurt them financially or otherwise.

Bonjean also questioned why Susan continued to mix with Kelly socially for the next 20 years, if she felt so threatened.

Joey Cappelletti and Amy Forliti in Minneapolis contributed to this report. 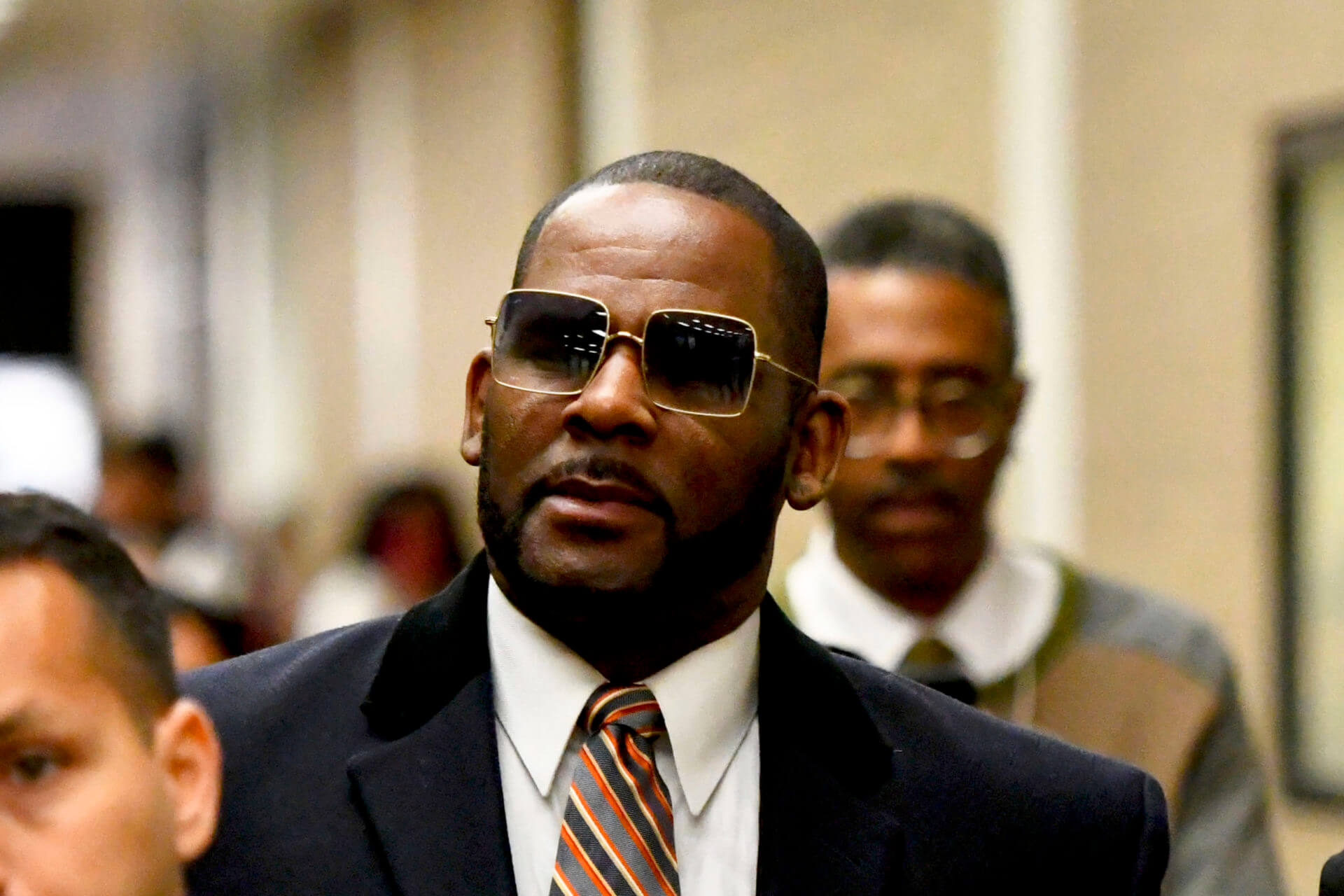 FILE - Musician R. Kelly, center, leaves the Daley Center after a hearing in his child support case on May 8, 2019, in Chicago. Closing arguments are scheduled Monday, Sept. 12, 2022 for R. Kelly and two co-defendants in the R&B singer’s trial on federal charges of trial-fixing, child pornography and enticing minors for sex, with jury deliberations to follow. (AP Photo/Matt Marton, File)
MORE NEWS