SALT LAKE CITY (KSTU) — The family of Easton Oliverson, who fractured his skull when he fell off a bunk bed at the Little League World Series last month, is reportedly suing the league and the company that made the beds.

According to Penn Live, a Philadelphia-based law firm filed a lawsuit on behalf of Easton and his parents, Jace and Nancy. They are suing Little League Baseball Inc. and John Savoy & Son. 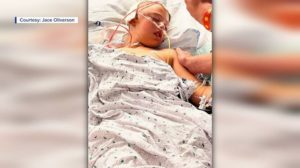 Easton Oliverson, a 12-year-old Little League World Series player from Utah, suffered a serious head injury when he fell off a bunk bed at a dormitory complex in Williamsport, Pennsylvania. (Jace Oliverson/KSTU)

The suit claims that Little League Baseball “failed to equip the upper bunks with rails to protect its occupants, causing Easton Oliverson to fall.

John Savoy & Son — operating as Savoy Contract Furniture of Williamsport, Pa. — is accused by the plaintiffs of selling “dangerous and defective” bunk beds that “caused significant and permanent injuries” to the boy.

Easton had just arrived in Williamsport, Pennsylvania on Aug. 14 ahead of his team from Santa Clara competing in the Little League World Series. Later that night, he fell off the top bunk and fractured his skull, which has required a massive amount of medical care since.

His recovery was going well for a time, but his family said he had a “major setback” on Sep. 9 when doctors had to reopen his skull cap to treat an infection.

This story was originally published Sept. 19, 2022 by KSTU in Salt Lake City, an E.W. Scripps Company.