KANSAS CITY, Mo. (KSHB) — A father’s prayers for justice in the murder of his daughter 30 years ago may finally be answered.

On Monday, the FBI announced plans to re-open a decades-long cold case involving the murder of Independence woman Diana Ault.

“Diane has been in the grave for 28 years and she’s only been on this earth for 26,” Laskey said of his daughter.

Laskey says it’s still inconceivable to think this happened to his daughter.

“She was a good kid,” he said. “She was a hard worker, very honest, very friendly. Never met a stranger. I don’t know, she was just a special little kid.”

The person who killed Ault has remained a mystery for nearly 30 years.

“I just leave it up to the Lord, that’s all I can do,” Laskey said.

Loren Freeman, a detective with the Independence Police Department and member of the FBI’s Violent Crimes Task Force, said the group is cautiously optimistic about the case.

Freeman and Jonathan Spaeth, a special agent on the FBI’s task force, recently revealed to KSHB their plans to take another look at the case.

“I will say there are new leads and we’re going to follow those leads wherever the evidence takes us,” Freeman said.

The Independence Police Department asked the FBI to help them with this unsolved murder, and for the past three years, several task force officers have reworked the case.

“We took everything out of the bags at Independence, we looked through each bag and we determined from there what could be tested, what couldn’t be retested,” Spaeth said.

They’re relying on new technology that wasn’t available in 1994, including advancements in DNA analysis.

“In consulting with the FBI’s forensic laboratory, we submitted new items to them for testing,” Spaeth said. “From that standpoint, we’re able to give a fresher look to certain pieces of evidence in that case.”

This is the news Laskey has been waiting for.

“I just thought it was a miracle coming into play,” Laskey said after receiving the call from Independence police. “I’ve been praying for many years, day and night.”

The case dates back to Super Bowl Sunday on Jan. 31, 1994. The Dallas Cowboys had just defeated the Buffalo Bills 30-13. Diana returned home late from a watch party with her four year old son and 7 month-old daughter.

A killer, lying in wait, shot Ault at close range in the left side of her neck with a single bullet as she walked down the hallway toward the kitchen. Her young son told police “someone shot his mommy.”

Police made the bloody discovery after responding to the Trinity Nazarene Church, just a half-mile away from Ault’s house.

According to police reports, neighbors reported a suspicious car in the church parking lot, saying they saw two people inside. A witness also said they saw someone running through the field next to the church. 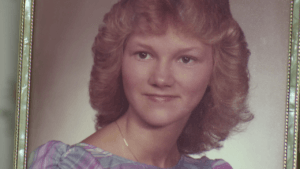 This photo provided by Billy Laskey shows murder victim Diana Ault. The FBI has announced their reopening the investigation in to her 1994 murder. (Bill Laskey via KSHB)

When police got to the church, they discovered the red 1989 Pontiac Grand Prix — engine running, keys in the ignition, unoccupied — belonged to Ault.

“They examined the inside of the vehicle. In their examination, they discovered a firearm,” Freeman said.

Police identified the gun as a Ruger Redhawk .44 magnum revolver. One bullet had been fired and two live rounds were still in the cylinder.

“What any potential witness in this case would say would be very important,” Freeman said.

Although prosecutors have never charged anyone in Ault’s case, investigators uncovered a connection between her murder and the 1989 brutal stabbing of 18-year-old Sarah De Leon in Kansas City, Kansas.

The connection? A woman named Carolyn Heckert, who had an affair with Ault’s husband and who also dated De Leon’s boyfriend.

In 2016, Wyandotte County prosecutors charged Heckert with first-degree premeditated murder in De Leon’s death. However, six months later, a judge dismissed the case, saying there wasn’t enough probable cause to move forward with a trial.

KSHB asked if Heckert, who has publicly denied any involvement in Ault’s murder, is now on the task force’s radar.

“We’ll start from the beginning and go down the road where the evidence takes us,” Spaeth said.

They’re hopeful the evidence will bring justice to Ault’s family.

“My message to the family is that Diana has not been forgotten,” Spaeth said. “We’re still continuing to put all the investigative resources we have available toward this case.”

Laskey says he hopes after all these years, investigators find the evidence they need so his daughter can finally rest in peace.

“Whether it be in my lifetime or not, I’m not sure. I don’t know if I’ll have another 28 years to wait for the verdict,” he said.

The FBI says any information can make a difference and is asking the public for help.

Anyone with tips about Diana Ault’s murder can call 1-800-CALL-FBI or go to tips.fbi.gov.

This story was originally published March 29, 2022, by KSHB in Kansas City, an E.W. Scripps Company.