A former crime scene investigator in Florida has been found guilty of the first-degree murder of her friend,  33-year-old Taylor Wright, whose remains were discovered under concrete on a family farm near Pensacola, Florida.

Ashley Britt McArthur, 42, was sentenced to life in prison with a mandatory minimum of 25 years served.

A former crime scene investigator in Florida is on trial for the September 2017 murder of a private investigator.

42-year-old Ashley Britt McArthur is accused of fatally shooting 33-year-old Taylor Wright over $34,000 before burying Wright’s remains under concrete on a family farm in Cantonment, about 30 minutes outside of Pensacola. 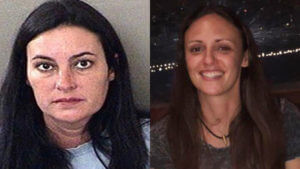 Investigators say McArthur, a former CSI, and Wright, a former North Carolina police officer, had been friends for about a year before the murder. During that time, Wright had entrusted $34,000 to McArthur for safekeeping while she battled her ex-husband in court over money and child custody.

On Sept. 8, Wright reportedly met up with McArthur to collect her $34,000. Wright then vanished until her remains were found 42 days later on property owned by McArthur’s family.

McArthur was arrested on Oct. 19, charged with second-degree murder.

Prosecutors point to cell phone records, text messages, surveillance video and bank records as building the timeline, the motive and the means for how McArthur allegedly committed premeditated murder.

September 8, 2017:
• Wright’s girlfriend, Casandra Waller, last hears from Wright in a text message while she was with McArthur.
• McArthur is seen on video at Tom Thumb supermarket driving a silver Ford F250 truck.
• McArthur’s cell phone puts her in the area near Britt Road, where her family’s farm is.

October 19, 2017:
• Search warrant executed at 2201 Britt Road, where human remains were found with Wright’s jewelry.
• A warrant for McArthur’s arrest is signed by Judge Robinson.
• McArthur is arrested for second-degree murder.

November 7, 2017: A grand jury returns an indictment for First-Degree Premeditated Murder and McArthur is held on no bond.

February 2, 2018:
• Judge grants motion for pretrial release.
• McArthur is released on a $400,000 bond with conditions she is to submit to GPS monitoring and reside at her mother’s home in Gulf Breeze.

March 2018:
• McArthur is charged with Arson, Racketeering and Fraud, crimes that reportedly occurred before the alleged murder.
From 2015-2017, McArthur was reportedly lining her pockets with stolen money.
• While managing her family business, Pensacola Automatic Amusement—which serviced entertainment machines and jukeboxes for various clients in the Pensacola area for 40 years—McArthur embezzled thousands of dollars from two local businesses.
•Fire breaks out at PAA the day McArthur was supposed to meet with the local businesses about the missing revenue.

January 25, 2019:
• McArthur is convicted of Racketeering and Fraud but not Arson.
• She is remanded to custody of the sheriff.

February 21, 2019: McArthur is sentenced on those convictions: 84 months, or 7 years, in state prison and three years of probation.

August 26, 2019: The case of Florida v. Ashley Britt McArthur for the murder of Taylor Wright begins.

August 30, 2019: The defendant Ashley McArthur is found guilty of first-degree murder and was sentenced to the mandatory sentence of life in prison.