PEMBROKE, Ky. — After finding Christian “Kit” Martin guilty of all charges, a jury recommended a sentence of life without the benefit of probation or parole. The former pilot was found guilty on three counts of murder, two counts of 1st-degree burglary, arson, criminal attempt to commit arson, and three counts of tampering with evidence. At Martin’s penalty phase sentencing on September 2, 2021, the judge ruled for the jury’s recommendation, sentencing Martin to life in prison without parole.

During an exclusive interview with Court TV, Martin still maintains his innocence.

PEMBROKE, Ky. — A former commercial pilot and US Army major is accused in the deaths of three neighbors in a sordid web of allegations including infidelity, murder and political opportunism.

Christian “Kit” Martin is accused of murdering Edward Dansereau and married couple Calvin and Pamela Phillips on November 18, 2015. The charred remains of Pamela Phillips and Dansereau were found in a burnt car in a field in Pembroke. The car was traced to the Phillips’ home, where investigators found another crime scene – Calvin Phillips dead from multiple gunshot wounds.

The triple-slayings occurred just weeks before Calvin Phillips was scheduled to testify in Martin’s military court-martial. The case was based on accusations of sexual abuse from Martin’s estranged wife and that he allegedly mishandled classified military information. In turn, Martin accused her of having an affair with Calvin Phillips and fabricating the abuse the claims. Martin also claimed she was married to another man during their union.

The triple murder case went cold until 2017 when the Kentucky Attorney General’s Office took over the case after talking to the Phillips family. Investigators say it was the family that provided them with a spent shell casing from the couple’s home, that according to grand jury testimony, transformed Martin from a person of interest to a suspect.

The forensic analysis reportedly shows the casing was fired from a .45 caliber Glock belonging to Martin. Cellphone tower evidence also reportedly places Martin in the area where the remains of Pamela Phillips and Dansereau were found. 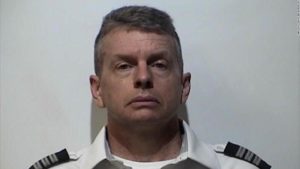 Martin was arrested at Louisville Muhammad Ali International Airport on May 10, 2019, the same day a Christian County grand jury indicted him on 10 counts. He’s charged with complicity in those crimes, including murder, because investigators say they can’t prove for certain that he himself carried out the killings.

Martin claims he’s innocent, saying he was home with his fiancée the day the killings occurred. His defense team argues the grand jury indicted him based on misleading testimony from an investigator about the cellphone tower evidence.

They also claim Martin was targeted by an attorney general seeking to bolster his tough-on-crime credentials as part of his gubernatorial campaign. That candidate, Andy Beshear, is now Kentucky’s governor, and the case is being tried by the Office of Attorney General Daniel Cameron, best known for his handling of the police-involved shooting death of Breonna Taylor.

Meanwhile, Martin has become a cause célèbre among men’s rights groups and others who believe he is being railroaded by the state of Kentucky after being the target of a “Pentagon sexual assault witch hunt” based on frivolous accusations.