BOSTON (AP) — A former Staples Inc. executive convicted of trying to bribe his three children’s way into elite universities was sentenced to serve 15 months in federal prison on Wednesday, the longest sentence so far handed down in the sprawling college admissions bribery scandal. 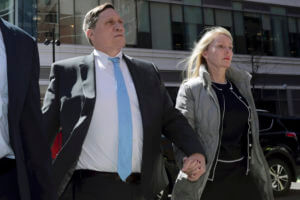 FILE – John Wilson arrives at federal court, with his wife Leslie, on April 3, 2019 to face charges in a nationwide college admissions bribery scandal in Boston. Wilson, a former Staples Inc. executive who was convicted of trying to bribe his children’s way into USC, Harvard and Stanford, is scheduled to be sentenced on federal charges Wednesday Feb. 16, 2022. (AP Photo/Charles Krupa, File)

John Wilson, 62, was also ordered to serve two years of supervised release, 400 hours of community service, a fine of $200,000 and $88,546 in restitution to the IRS in the sentence handed down in Boston federal court, according to U.S. Attorney for Massachusetts Rachael Rollins’ office.

All told, nearly 60 people were charged in an investigation dubbed by authorities as “Operation Varsity Blues,” including athletic coaches at Georgetown, Yale and other prestigious schools.

Wilson was accused of paying $220,000 to have his son designated as a USC water polo recruit, an additional $1 million to buy his twin daughters’ ways into Harvard and Stanford, and then filing a false tax return claiming part of it as a tax write-off.

“Is there a two-for-one special? If you got twins?” Wilson asked Rick Singer, the admissions consultant at the center of the scheme, in a phone conversation caught on an FBI wiretap.

In one call, Wilson asked Singer which sports “would be best” for his twin daughters. Singer responded that it “doesn’t matter” and that he would “make them a sailor or something” because Wilson had a home on Cape Cod.

Prosecutors had sought a stiffer, 21-month prison term for Wilson, and during trial honed in on the FBI wiretaps to show that Wilson was in on the scheme.

Wilson was convicted on a range of fraud and bribery charges in October along with Gamal Abdelaziz, a former casino executive sentenced earlier this month to serve one year and one day in federal prison. The two men are so far the only parents among the dozens implicated in the scheme to go to trial.

Wilson’s lawyer Noel Francisco, who served as U.S. solicitor general under former President Donald Trump, argued in a statement that his client’s case is “fundamentally different” from the others since his children were “well qualified for admissions” with strong grades and test scores.

Francisco also argued that Wilson’s payments were for the schools and their athletic programs, not to personally enrich anyone.

“Making a donation to improve a qualified applicant’s chances of admission is a well-established process at colleges and universities across the country,” he said. “It is not a crime.”

Dozens of other defendants have already pleaded guilty in the scheme and served their time. “Desperate Housewives” star Felicity Huffman was sentenced to 14 days in prison. “Full House” star Lori Loughlin was sentenced to two months and her fashion designer husband Mossimo Giannulli was sentenced to five months.

During his trial, Wilson insisted he had no idea that Singer, the admissions consultant, was using his money as bribes and falsifying or exaggerating athletic credentials on behalf of his kids.

Instead his lawyers, who had argued for a lesser six-month prison sentence, portrayed Singer as a con man who manipulated the parents and assured them his work was legitimate and endorsed by the schools.

Among the family and friends who wrote to U.S. District Judge Nathaniel Gorton urging leniency ahead of Wednesday’s sentencing were two members of the Kennedy clan.

Edward M. Kennedy Jr., the son of the late Massachusetts senator, and Kerry Kennedy, the daughter of Robert F. Kennedy, said they’ve known Wilson for years as a neighbor in Hyannisport on Cape Cod.