DENVER (KMGH) — A man who died in 1981 was identified as the suspect in four cold case homicides in the Denver area, authorities announced Friday morning.

The women who were killed were Madeleine Furey-Livaudais, 33, Dolores Barajas, 53, Gwendolyn Harris, 27, and Antoinette Parks, 17, officials with the Denver Police Department and Adams County Sheriff’s Office said at a news conference. The four murders — three in Denver, one in Adams County — happened over the span of 1978 to 1981. 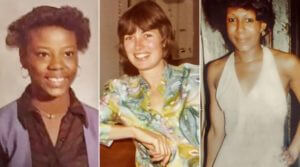 A man who died in 1981 was identified as the suspect in four cold case homicides in the Denver area. Three of the victims are pictured. L to R: Antoinette Parks, Madeleine Furey-Livaudais, Gwendolyn Harris. The family of the fourth victim, Dolores Barajas, did not wish to share her picture. (KMGH)

Over the course of several decades and thanks to evolving technology, the suspect was identified as Joe Michael Ervin, who died in 1981.

Timeline of the cold cases, investigations

DPD Major Crimes Division Cmdr. Matt Clark laid out a brief timeline of the homicides and how investigators were ultimately able to link them together.

The first murder occurred on Dec. 7, 1978. At 6:15 p.m. that evening, Furey-Livaudais was found deceased in her home along Poplar Street in Denver. Police determined the suspect had entered her home and stabbed her multiple times, Clark said.

On Aug. 10, 1980 at 7:10 a.m., Denver police responded to a report of a woman lying in the roadway along the 500 block of E. 17th Avenue. Police found Barajas in the road and suffering from multiple stab wounds, Clark said. She died at the scene.

On Dec. 21, 1980, a person called 911 at 10:45 a.m. to report an unconscious woman lying in the street near E. 47th Avenue and Andrews Drive in the Montebello neighborhood. Police found Harris deceased at the scene, Clark said. She had been stabbed multiple times.

About a month later, on Jan. 24, 1981, deputies with the Adams County Sheriff’s Office responded to the area of 64th Avenue and Broadway after receiving a report of a woman lying in a field. When they arrived, they found Parks’ body. She had been stabbed multiple times and was deceased, Clark said.

“The investigators and forensic scientists who conducted the initial investigation of these deaths 40 years ago used all available resources and investigative methods that were available to them as they attempted to identify the offender responsible in each case,” he said.

Each case was investigated separately in the beginning as authorities could not yet connect them to each other.

Despite the intense investigations that immediately followed the women’s deaths, each case went cold as investigators exhausted all of their leads.

“That potentially could have been the end of this story had it not been for the diligence and tenacity of the investigative team of detectives and forensic scientists who reexamined each case over the past two decades,” he said.

But the teams — even as investigators retired and new ones were brought in — continued working on these cases, Clark said.

Once the technology was available, investigators began linking DNA evidence together, which brought new momentum to the cases.

In October 2018, authorities determined that DNA evidence in the Adams County murder case of Parks linked to the same suspect.

“With this new evidence, the investigative team had renewed hope that the individual responsible for these deaths could be identified,” Clark said.

In 2019, the investigative team narrowed their focus to ancestry of the offender in Texas, thanks to investigative genetic genealogy. Two years later, Denver Crime Lab personnel and cold case investigators worked with Texas officials to conduct familial DNA searches in Texas’ databases. Through this, they found a relative and focused efforts on one person — Joe Michael Ervin, who was born June 25, 1951.

Ervin had died in 1981 and was buried in Arlington, Texas.

According to Denver police, he died by suicide in the Adams County Detention Center while he was in custody for the murder of Aurora Police Officer Debra Sue Corr on June 27, 1981.

Corr had contacted Ervin for a traffic violation, and as she was trying to arrest Ervin, he took her weapon and shot her, according to police. He also shot an Aurora Police explorer scout who tried to intervene, though the scout survived, and Ervin was arrested at his home in Aurora. Corr was the first APD officer killed in the line of duty.

Colorado investigators tried to obtain archived DNA samples to compare his DNA to the unidentified DNA found at the scene of the four homicides, but this was unsuccessful. As a result, the investigators went to Texas and with help from state and local officials in Texas, they had a search warrant authorized to exhume Ervin’s body to obtain a DNA sample, Clark said.

Clark said investigators do not believe any other suspects were involved in the women’s deaths.

“I appreciate the patience and the resilience of the families and the community over the past 40 years as these cases remain unsolved,” he said. “These women were not forgotten.”

DPD Chief Paul Pazen said the closure of these four cases is a success for the department and community, but that doesn’t take away the tragic impact on the victims and their families.

“While the perpetrator cannot fully be held accountable for his despicable actions, we hope that knowing who is responsible can bring some peace to the families,” he continued.

Witness information can help the department solve other cold cases like this that are still under investigation, he said.

“My plea, my ask, is that if you have any information on any homicide or crime, please come forward. You can do so anonymously utilizing Metro Denver Crime Stoppers (720-913-7867). We need to help more families in our community.”

Families of victims remember their loved ones

Two of Parks’ brothers attended Friday’s announcement and spoke about the closure it brought. Parks was six to seven months pregnant at the time of her death.

George Journey said the investigation took a long time, but they can finally have peace “knowing who did this to my little sister.” He explained that they are the only two siblings alive after their sisters’ deaths over the years.

“I’d like you guys to know, we have closure and we’re thankful for the hard work and determination of everybody involved here,” he said.

He told Denver7 that his sister loved children and was looking forward to motherhood.

“That’s the sad part he [Ervin] not only took one life, he took two,” Journey said.

His brother, Karl Journey, said he can now rest better at night.

“My mom and my sisters aren’t here, but I know they are, because they’re sitting high and looking low,” he said. “They’re saying right now, ‘Hey, thank you guys. Every last one of you. For everything.'”

On Jan. 21, Denver7 spoke with Parks’ family, who described the call from a detective who told him they had solved the decades-old case.

The two daughters of Furey-Livaudais, Molly and Ariel Livaudais, were also in attendance.

Molly Livaudais thanked investigators for their hard work and sacrifice over the years to solve these homicides.

“She was a young woman with a very bright future. She was a writer — she had written for nature magazines for years, and had written a published book. She was an ecologist with a passion for the natural world and the environment. She was a loving wife, sister, daughter and mother to two very young girls,” she said. “…We didn’t get to grow up with her and hear her stories and witness contributions she could have made to the world.”

Molly Livaudais said the past few days have been difficult to process, as they learned about the man who not only is suspected of killing their mother, but three others.

“It is a great relief to our family to finally have this resolution and to know that they never stopped working toward this goal for us,” she said.

In addition, a Denver cold case detective provided a statement from the sisters of Madeleine Livaudais, which read: “Madeleine had a vibrant and curious spirit. She was a fearless adventurer and loved traveling as part of her job as an editor of the Children’s Magazine ‘Ranger Rick.’ She loved learning. Every elementary school report had a notation saying something like, ‘Excellent student, but talks too much.’ Madeleine was fun and delighted in her daughters, Molly and baby Ariel. She was a romantic who loved her life, but when her daughters were born, she was over the moon…. It is an unmitigated tragedy that they never got to know their creative and talented mother. We will never stop missing her.”

Schepman with the DPD said the families of Barajas and Harris live out of state, but asked police to share the following messages:

“Dolores Barajas was a wife, mother, grandmother and beloved part of a loving family. She had spent the summer of 1980 visiting family in Denver and working at a hotel downtown. That Sunday was to be her last day of work before returning to her home out of state. Her family still misses her very much and expressed great appreciation for everyone’s efforts and determination in solving this case.”

“Gwendolyn Harris was a mother, sister, daughter, aunt, granddaughter and niece. Gwen was a bright, soft-spoken, athletic young woman who enjoyed life and always had a smile on her face. Her family also shared that because of the decision of another to take life with no regard, the 1980 murder of Gwendolyn Harris was devastating and unimaginable to the family. Gwen will forever be in our hearts and always our joy.”

This story was originally published Jan. 28, 2022 by KMGH in Denver, an E.W. Scripps Company.