CHICAGO (AP) — Outside the courtroom where former “Empire” actor Jussie Smollett is fighting charges accusing him of lying to Chicago police about being the victim of an anti-gay, racist attack, his publicist has introduced a roster of supporters to the assembled TV cameras.

Renowned opera singer Lauren Michelle, who also appeared on “Empire,” spoke of how one of her best friends from high school has maintained his humanity despite the attacks on his character. Smollett’s pastor from New York, Damon Mack, said the person prosecutors are portraying in court is not “the Jussie I know.” 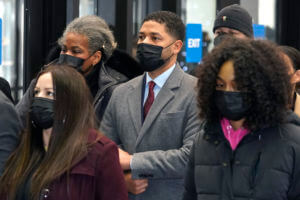 Actor Jussie Smollett, center, arrives with his mother Janet, left, and other family members at the Leighton Criminal Courthouse for day three of his trial in Chicago on Wednesday, Dec. 1, 2021. Smollett is accused of lying to police when he reported he was the victim of a racist, anti-gay attack in downtown Chicago nearly three years ago. (AP Photo/Charles Rex Arbogast)

And activist Bella BAHHS, who met Smollett while protesting the police murder of a 16-year-old, said she doesn’t trust Chicago police not to make things up — including the allegations against her friend.

The daily turns at the microphone are part of a broader strategy underway since Smollett’s trial started at the Chicago courthouse roughly one week ago: trying to ensure the 39-year-old emerges from this scandal and legal troubles with his reputation and career intact, or at least having suffered as little damage as possible, whatever the outcome.

The charges against Smollett — six counts of disorderly conduct for lying to police about the January 2019 attack — are low-level felonies and carry a possible sentence of three years in prison. Legal experts say if convicted he would most likely get probation and be ordered to perform community service.

The impact on his livelihood could be far more serious. Taking the witness stand Monday, Smollett testified that “I’ve lost my livelihood.” His media relations team, which is led by a former Chicago TV reporter, released a statement to The Associated Press from family friend Fania Davis, who said Smollett already has lost income and “many professional opportunities” due to a “character assassination and disinformation campaign” by Chicago police.

“This is an injury to his personal reputation, to his career and his soul,” said Davis, whose sister is civil rights activist Angela Davis. “He could easily have copped a plea, with a slap on the wrist and then moved on with his life. But he chose instead to stand up to injustice.”

Publicist Danny Deraney, who works with entertainment figures and often takes on crisis PR clients but is not working with Smollett, said the performer will be hurt in any attempt to return to his career because he was far from a household name before, and so many learned his identity because of the alleged attack and charges against him.

“Nobody really knew who he was, unless you watched the show,” Deraney said. “For the time being, I don’t see any other way of people seeing him and not knowing him for this.”

The atypical accusations, the absurdity of his alleged crime and his tendency to be fodder for comedians may hurt him more than accusations, even of serious crimes.

“Being in the public eye as far as being on television or film or whatever it is, that’s going to be hard for him. I don’t think people are going to take him seriously,” Deraney said. “People who become the butt of jokes, of doing things as ridiculous and absurd as what allegedly happened, have a harder time working.”

Some of the Smollett strategy is playing out in the court proceedings, where Smollett testified he was a victim of a hate crime after two brothers said the actor recruited them to carry out the attack on him so he could publicize it via social media. Police testified they were able to corroborate the siblings’ accounts.

Smollett’s defense attorneys have argued that the brothers committed the attack because they are homophobic and don’t like Smollett, who is gay. They say the men told police it was all staged by the actor so they could shake him down for $1 million each to not testify.

Smollett’s legal team also has said Judge James Linn is biased against them, at one point asking for a mistrial — which Linn denied — after he cut off her questioning of one of the brothers about homophobic language he used, calling it “collateral” material. A defense attorney also claimed Linn “lunged” at her — all of which they could use as grounds for appeal if Smollett is convicted, and to argue in the court of public opinion that the legal system unfairly wronged him.
And separate from the trial, Smollett’s team and his family — which includes five siblings, most of whom are also actors and a mother who was active in fighting for civil rights — have been promoting both the man and his talents.

On the first day of his trial, Smollett learned that a film he wrote, directed and produced, “B-Boy Blues,” won the “fan favorite narrative feature” award in the American Black Film Festival Awards. His publicist blasted the news out to journalists, along with a link to a 2016 New York Times article about the Smollett family’s acting chops and activism — supporting causes like HIV/AIDS and the Black Lives Matter movement — and a letter of support from activist and artists, including Davis and Danny Glover.

On Monday, his team sent out a photograph of Smollett and his family meeting with civil rights leader the Rev. Jesse Jackson over the weekend.

Early in his acting career, Smollett starred along with his brothers and sisters in the TV series “On Our Own,” about a group of orphaned siblings, that aired for one season. He had other roles in TV and movies, including playing Langston Hughes in “Marshall,” about Thurgood Marshall, the first Black Supreme Court justice.

His biggest role was on “Empire,” a musical drama about an entertainment company that was filmed in Chicago. Smollett starred on the program for four years starting in 2015. Producers renewed his contract for the sixth and final season in 2019, but he never appeared in an episode.

Deraney said it can be difficult to predict who will be accepted back into public life. A supportive family in the entertainment industry like Smollett has – sister Jurnee’s acting career is thriving – might not be a huge career advantage initially, but if they get into prominent positions and can hire him for roles, it might.

“If you’ve got people behind you that are financially secure, This whole industry is built on nepotism, it’s all about who you know. If his family stands behind him, that’s going to be fine for him,” Deraney said.

Fania Davis said in her statement to AP that Smollett comes from “a family of justice warriors” like her family and her sister’s family.
“We are very proud that even in this difficult period, Jussie has persevered and created art at the highest level and we are confident he will continue to do so,” she said.
___
Associated Press entertainment writer Andrew Dalton contributed to this story from Los Angeles.