ROME (AP) — A jury in Rome on Wednesday began deliberating the fates of two young American men who are charged with killing an Italian police officer near the hotel where they were staying while on summer vacation in 2019.

Finnegan Lee Elder, 21, and Gabriel Natale-Hjorth, 20, were indicted on charges of homicide, attempted extortion, assault, resisting a public official and carrying an attack-style knife without just cause. 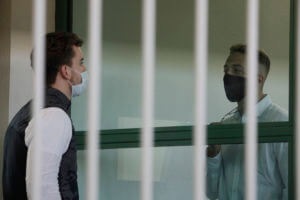 Finnegan Lee Elder, right, shows a crucifix to co-defendant Gabriel Natale-Hjorth before a jury began deliberating their fate in their trial for the slaying of an Italian plainclothes police officer on a street near the hotel where they were staying while on vacation in Rome in summer 2019, in Rome, Wednesday, May 5, 2021. (AP Photo/Gregorio Borgia)

Judge Marina Finiti indicated the verdicts could come later Wednesday or on Thursday.

Prosecutors alleged that Elder stabbed Vice Bridgadier Mario Cerciello Rega 11 times with a knife he brought with him on his trip to Europe from California and that Natale-Hjorth helped him hide the knife in their hotel room.

The July 26, 2019 slaying of the officer from the storied Carabinieri paramilitary police corps shocked Italy. Cerciello Rega, 35, was mourned as a national hero.

The two Californians on trial were allowed out of steel-barred defendant cages inside the courtroom to sit with their lawyers before the case went to the jury, which consists of presiding judge Finiti, a second judge and six civilian jurors.

“I’m stressed,” Elder said to one of his lawyers. At another point during Wednesday’s brief court hearing, Elder took a crucifix he wears on a chain around his neck and kissed it.

Cerciello Rega had recently returned from a honeymoon when he was assigned along with a plainclothes police partner, officer Andrea Varriale, to follow up on a reported extortion attempt.

Prosecutors contend the young Americans concocted a plot involving a stolen bag and cellphone after their attempt to buy cocaine with 80 euros ($96) in Rome’s Trastevere nightlife district didn’t pan out. Natale-Hjorth and Elder testified they had paid for the cocaine but didn’t receive it.

Both defendants contended they acted in self-defense. During the trial, which began on Feb. 26, 2020, the Americans told the court they thought that Cerciello Rega and Varriale were thugs or mobsters out to assault them on a dark, deserted street. The officers wore casual summer clothes and not uniforms, and the defendants insisted the officers never showed police badges. 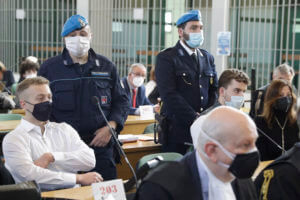 Finnegan Lee Elder, left, and co-defendant Gabriel Natale-Hjorth, right, sit before a jury began deliberating their fate in the trial for the slaying of an Italian plainclothes police officer on a street near the hotel where they were staying while on vacation in Rome in summer 2019, in Rome, Wednesday, May 5, 2021. (AP Photo/Gregorio Borgia)

Under Italian law, an accomplice in an alleged murder can also be charged with murder even without materially doing the slaying.

Varriale, who suffered a back injury in a scuffle with Natale-Hjorth while his partner was grappling with Elder, testified that the officers did identify themselves as Carabinieri.

Prosecutor Maria Sabina Calabretta has asked the court to convict both defendants and to mete out Italy’s stiffest punishment, life imprisonment.

At the time of the slaying, Elder was 19 and traveling through Europe without his family, while Natale-Hjorth, then 18, was spending the summer vacation with his Italian grandparents, who live near Rome. Former classmates from the San Francisco Bay area, the two had met up in Rome for what was supposed to be couple of days of sightseeing and nights out.