WASHINGTON (AP) — The Justice Department is directing the federal prison system to revamp how it monitors government-run prison deposit accounts that have at times been used by inmates to shield themselves from paying debts and for suspicious or illegal activity.

The directive, issued this week by Deputy Attorney General Lisa Monaco, instructs the Bureau of Prisons to overhaul its current policies on so-called inmate trust accounts to “strengthen appropriate monitoring and reporting.” The Associated Press obtained a copy of Monaco’s directive and a subsequent Bureau of Prisons memo providing new guidance to wardens. 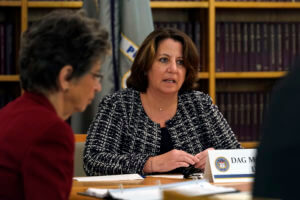 “In administering this program, the Bureau must take appropriate steps to prevent inmates from using such accounts to engage in unlawful activity or to avoid obligations like paying court-ordered restitution to victims,” Monaco wrote.

On Thursday, the Bureau of Prisons issued new guidance requiring wardens at the government’s 122 federal prisons to report the amount of money inmates have in their accounts each month and identify inmates with balances over $2,500. The memorandum also directs officials to refer cases to other law enforcement agencies when a crime may have been committed.

It also instructs the agency to investigate inmates who receive large sums of money that result in skyrocketing balances, identify outside sources depositing money in accounts of multiple inmates or former inmates depositing money for prisoners still in custody.

A Justice Department official said Monaco’s directive is meant to create a uniform policy across the federal prison system and to ensure Bureau of Prisons officials are taking appropriate steps to monitor inmate accounts. The official said the Justice Department’s new policies were aimed at ensuring that inmates aren’t using their accounts to avoid financial obligations or to break the law. The new procedure creates a clearer process for prison officials to report, track and investigate suspicious or criminal activity.

The official said the Bureau of Prisons has identified about 20 inmates — out of the more than 130,000 federal prisoners — who have more than $100,000 in their accounts.

But they cautioned there is nothing inherently wrong with an inmate holding large sums of money in their accounts, unless they are involved in illegal activity or are using the account to shield court-ordered debts like child support, alimony or restitution to be paid to victims. The official spoke on condition of anonymity to discuss the directive before it was formally distributed.

The accounts have long drawn scrutiny from other law enforcement officials who have warned that it was ripe for abuse and corruption.

Earlier this month, federal prosecutors filed court papers that detailed how Larry Nassar — the former USA Gymnastics national team doctor — owed nearly $58,000 to his victims, even though he had more than $12,000 deposited in his prison fund account. The Washington Post first reported that Nassar had paid only about $100 per year, or about $300 since he first entered the federal prison system in 2017.

Monaco’s memorandum is a broad directive to the Bureau of Prisons that is likely to go far beyond the initial guidance that prison officials issued on Wednesday.

It also tasks Bureau of Prisons officials with improving their coordination with other law enforcement agencies and making sure all steps are being taken to “reduce opportunities of abuse.”