NEW YORK (AP) — A key accuser in the New York City rape trial of Harvey Weinstein is due back on the witness stand for a third day of testimony after she broke down in tears Monday, halting an exhaustive cross-examination that focused on the nature of her relationship with the once-powerful movie mogul.

The woman is expected to be on the stand much of the day Tuesday as Weinstein’s lawyers continue a painstaking review of emails and other evidence they say paint the 34-year-old as a manipulative liar who gritted her way through sexual encounters with Weinstein because she enjoyed the perks of knowing him.

She became emotional while reading an email passage about being abused earlier in her life. It was part of a lengthy confessional email she sent to her then-boyfriend in May 2014 about her relationship with Weinstein.

She was bawling as she left the courtroom, at first for a brief break, and her cries could be heard from a nearby witness room. When it was clear she could not continue, the judge adjourned for the day, sending the jury home about an hour earlier than usual.

The shortened court session and the woman’s return to the witness stand Tuesday have thrown the trial schedule into disarray, pushing other witnesses to later in the week and slowing what had been an unexpectedly fast-paced trial.

The woman, who met Weinstein while she was an aspiring actress, testified Monday that she tried to make Weinstein “my pseudo father” after a rough upbringing. She said she continued seeing him and sending him flattering emails after the alleged rape in March 2013 because she didn’t want him to harm her fledgling career.

“I wanted him to believe I wasn’t a threat,” the woman testified.

During Monday’s round of cross-examination, Weinstein lawyer Donna Rotunno zeroed in on the woman’s admission that she also had noncoerced sexual encounters with Weinstein. The woman said those happened only after “a long negotiation” in which she sought to limit their activities. She said even then, “I wasn’t happy to do it.”

The woman responded: “I felt there was an aspect to the way I felt I needed to protect myself that had an element of manipulation.”

At one point, Rotunno shot back: “You made a choice to have sexual encounters with Harvey Weinstein when you weren’t sexually attracted to him. … You liked the parties and you liked the power.”

The woman alleges Weinstein trapped her in a New York hotel room in March 2013, and angrily ordered her to undress as he loomed over her, and then raped her. 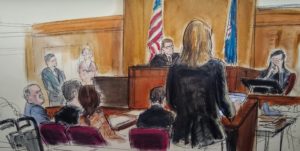 In this courtroom sketch, a witness weeps as she testifies during the Harvey Weinstein trial, Friday, Jan. 31, 2020, in New York. A key accuser in Weinstein’s trial testified Friday that he trapped her in a New York hotel room, angrily ordered her to undress and raped her, but that she stayed in contact with him because “his ego was so fragile” and she wanted to be seen as naive. (Elizabeth Williams via AP)

She alleges Weinstein raped her again eight months later at a Beverly Hills hotel, where she worked as a hairdresser. She said Weinstein attacked her after she told him she was dating an actor.

The woman said she has not testified before a grand jury regarding that matter and hasn’t decided whether to pursue charges, saying she asked California prosecutors “to just give me space until this trial is over.”

The testimony comes at a pivotal moment in the trial of Weinstein, whose downfall energized the #MeToo movement. He is charged in New York with the 2013 rape and also sexually assaulting Mimi Haleyi, a former “Project Runway” production assistant, in 2006. A conviction could put him behind bars for the rest of his life.

Weinstein, 67, has insisted that any sexual encounters were consensual.

The Associated Press has a policy of not publishing the names of people who say they are victims of sexual assault without their consent, unless they go public. The AP is withholding the name of the woman because it isn’t clear if she wishes to be identified publicly.