COLUMBIA, S.C. (AP) — A lawyer for disgraced South Carolina attorney Alex Murdaugh said Tuesday that investigators have indicated they intend to pursue murder charges against him for the deaths of his wife and son, who were fatally shot outside their home more than a year ago.

Lawyer Jim Griffin said in a statement that the South Carolina Law Enforcement Division told Murdaugh family members they plan to seek indictments from a grand jury later this week.

“We won’t have any comment until charges are actually brought against Alex,” Griffin said.

Officials with both state police and the attorney general’s office would not comment on whether authorities were pursuing the indictments, which were first reported by news and opinion website FITSNews. 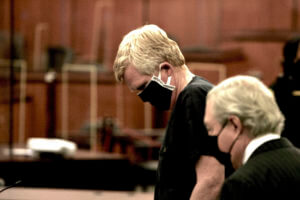 Murdaugh already faces dozens of criminal charges that have piled up in the months since his wife Maggie, 52, and their 22-year-old son, Paul, were killed. But until now he has not been charged in connection with their deaths; he’s repeatedly denied any role in those killings.

The deaths led to at least a half-dozen investigations into Murdaugh and his finances resulting in charges that he stole $8.5 million from people who hired him and that he lied to police in saying he was shot by a stranger on a roadside when — officials say — he really asked a friend to kill him so his surviving son could collect a $10 million life insurance policy.

Maggie and Paul Murdaugh were shot several times between 9 and 9:30 p.m. the night of June 7, 2021, outside their home on the family’s land near Islandton, authorities said. Their bodies were found near dog kennels, according to Colleton County Coroner Richard Harvey.

At the time, authorities reported that Alex Murdaugh discovered the bodies and called 911. His family told “Good Morning America” that Murdaugh had been visiting his father in the hospital and checking on his mother when the killings happened.

The South Carolina Supreme Court also disbarred Murdaugh on Tuesday, confirming the inevitable after Murdaugh’s attorneys declined to contest arguments at a June disbarment hearing. In the order, the state Supreme Court noted its decision “in no way” affects ongoing investigations.