WAUKESHA, Wis. (AP) — A Milwaukee man accused of killing six people and injuring dozens more when he drove an SUV through a suburban Christmas parade pleaded not guilty Friday to scores of criminal charges.

Darrell Brooks Jr., 39, entered the pleas to 77 charges, including six counts of homicide and multiple counts of reckless endangerment, during a court appearance that lasted less than five minutes. Brooks’ attorneys filed for a change of venue in the case on Thursday, but it’s not clear when that motion will be considered. He remains jailed on $5 million bail. 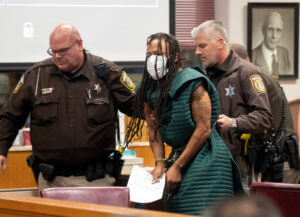 During the preliminary hearing, police detective Thomas Casey testified that he and other officers yelled at Brooks to stop as he drove the SUV through the parade in downtown Waukesha on Nov. 21.

He described how the vehicle zigzagged across the street for blocks, smashing into marchers from behind and running them over. He said Brooks injured 61 people, including the six people he killed.

Brooks’ attorney, public defender Anna Kees, maintained that he couldn’t turn off the parade route because the side streets were barricaded and full of spectators. She noted, too, that he told detectives that he didn’t mean to kill anyone and couldn’t bring himself to look when detectives showed him photos of the carnage.