A March 30 hearing has been set on a proposed $83 million lawsuit settlement for people who lost property and belongings in the collapse of a Florida beachfront condominium building that killed 98 people.

Miami-Dade Circuit Judge Michael Hanzman said Wednesday that he would consider any objections to the proposal before deciding whether to give it final approval. Hanzman did say, however, that the settlement could achieve “an excellent result” in the Champlain Towers South case. 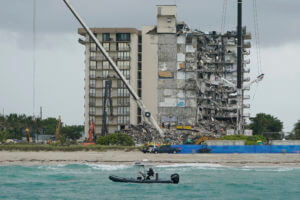 FILE – A Florida Fish and Wildlife Conservation law enforcement boat patrols in the ocean in front of search and rescue efforts at the Champlain Towers South condo building, where scores of people remain missing almost a week after it partially collapsed, Wednesday, June 30, 2021, in Surfside, Fla. A Florida grand jury issued a lengthy list of recommendations Wednesday, Dec. 15, aimed at preventing another condominium collapse like the one that killed 98 people in June, including earlier and more frequent inspections and better waterproofing. (AP Photo/Lynne Sladky, File)

“It would be nice to do it all at one time,” said Harley Tropin, one of the lawyers for victims in the case.

A preliminary order by the judge says that each unit owner will be paid a share based on their ownership portion of a condominium unit and for personal items that were lost. The money comes from insurance and from the sale of the beachfront property in Surfside, Florida. There were 136 units in the building.

Objections in writing are to be filed by March 23.

The proposed settlement does not include money for wrongful death claims arising from the 98 people who died in the June 24 collapse of the 12-story building. Lawyers in the case are now looking for an expert to handle how to value each of those claims, which will be addressed separately.

“My feeling is this process needs to get started sooner rather than later,” Hanzman said. “I want this process up in the next couple of weeks.” 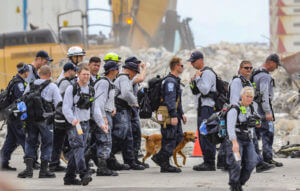 Search and rescue team members depart after working the debris field of the 12-story oceanfront condo, Champlain Towers South in Surfside, Fla., Wednesday, July 7, 2021. No one has been rescued from the site since the first hours after the building collapsed on June 24 when many of its residents were asleep. (Al Diaz/Miami Herald via AP)

The Surfside site where the building once stood will be put up for auction at the end of April, attorneys said. One offer for about $120 million has been on the table for months, but there may be others as the auction approaches.

“We continue to get get great interest in the property,” said Michael Goldberg, a lawyer appointed by Hanzman as the receiver in the case.

The National Institute of Standards and Technology is the main agency handling the investigation into the collapse, which officials have said would take two or more years.