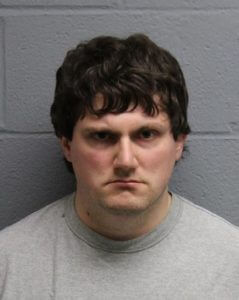 Officers said Frock was employed as a long-term substitute and head Varsity Volleyball Coach at Westminster High School in Carroll County and may be or have been associated with other schools and athletic businesses in the Baltimore region.

“Mr. Frock is no longer employed by Carroll County Public Schools. His employment was terminated today,” Carroll County Schools said in a statement. “We are cooperating fully with the Carroll County Sheriff’s Office and their investigation into this matter.”

“We are of course shocked by these troubling charges and believe justice will be served as our criminal justice system completes its investigations,” they commented.

The sheriff’s office said that on Monday, a search warrant was executed at his home on Courtland Street in Taneytown.

Officials say that between April 2021 and October 2021, the National Center for Missing and Exploited Children received Cybertipline Reports that a subject, later identified as Frock, had distributed files of child pornography through the social media app, Snapchat.

Officers said Frock pretended to be a high school aged male on social media to facilitate exchange of explicit photos and videos.

Investigators are working with school officials and the Carroll County Board of Education to identify additional student victims who may have had inappropriate contact with Frock.

This story was originally published May 9, 2022 by WMAR in Baltimore, an E.W. Scripps Company.