LONDON (AP) — Prince Andrew wasn’t on trial in the Ghislaine Maxwell sex trafficking case but her conviction is bad news for the man who is ninth in line to the British throne.

With the conclusion of the Maxwell case, attention will now turn to a U.S. civil suit in which the plaintiff alleges Maxwell and long-time boyfriend Jeffrey Epstein took her to London, New York, and the U.S. Virgin Islands to have sex with Andrew when she was underage. 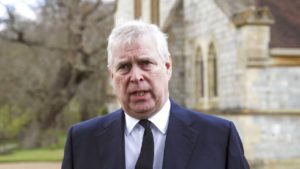 FILE – In this Sunday, April 11, 2021, file photo, Britain’s Prince Andrew speaks. during a television interview at the Royal Chapel of All Saints at Royal Lodge, Windsor, England, Sunday, April 11, 2021. A lawsuit by an American who claims Prince Andrew sexually abused her when she was 17 might have to be thrown out because she no longer lives in the U.S., lawyers for the Prince said in a court filing Tuesday, Dec. 28, 2021. (Steve Parsons/Pool Photo via AP, File)

Andrew denies the allegations, but Wednesday’s verdict shows that at least one American jury was willing to believe the young women trafficked by Epstein and Maxwell in a criminal case, where the standard of proof is higher than in civil cases.

On Tuesday, Andrew’s lawyers said Virginia Giuffre cannot sue the prince in a U.S. court because she doesn’t live in Colorado, as she claims. Instead she’s living in Australia with her husband and their three children.

Maxwell was found guilty on Wednesday of five of six counts, including sex trafficking of a minor, transporting a minor with the intent to engage in criminal sexual activity, and three related counts of conspiracy.

Epstein killed himself in 2019 in a New York jail cell while awaiting trial on sex abuse charges.