By Emanuella Grinberg and Julia Jenaé

BRUNSWICK, Ga. (Court TV) — The three men convicted of felony murder and other violent crimes for the 2020 death of Ahmaud Arbery will return to court Friday for a hearing to determine their punishment.

The stakes are grim for Travis McMichael, 35, Gregory McMichael, 66, and William “Roddie” Bryan, 52, no matter what happens. They each face a mandatory sentence of life imprisonment on multiple counts of felony murder, plus the possibility of more time on additional charges. Glynn County Superior Court Judge Timothy Walmsley will decide if the defendants should get a chance at freedom after 30 years. Even then, it will be up to a parole board to decide if they should be released.

In a pretrial filing, Georgia prosecutors said they intend to request sentences of life without parole as permitted under Georgia statutes § 16-5-1 (murder), § 17-10-2 (presentence hearing procedure) and § 17-10-6.1 (punishment for serious violent offenders). The prosecution will go first during the hearing by presenting victim impact statements and arguing their side, followed by arguments from each defendant in the order they are named in the indictment: Travis McMichael, Gregory McMichael, William “Roddie” Bryan.

Defense lawyers told Court TV they intend to seek mercy in the form of life with the possibility of parole. It remains to be seen how much time each side will request for the other charges for which the defendants were convicted, including aggravated assault and false imprisonment. 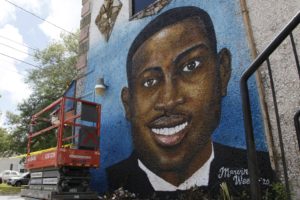 FILE – In this May 17, 2020, file photo, a recently painted mural of Ahmaud Arbery is on display in Brunswick, Ga., where the 25-year-old man was shot and killed in February. It was painted by Miami artist Marvin Weeks.  (AP Photo/Sarah Blake Morgan, File)

In addition to setting periods of incarceration, Judge Walmsley will also decide if the sentences should be served consecutively or concurrently. If no distinction is indicated, the sentences will run concurrently. Since each defendant was convicted of multiple murder charges, it’s likely the judge will merge them for killing the same person for purposes of sentencing rather than each defendant receiving multiple life sentences. Although Georgia is a death penalty state, the option is not on the table because prosecutors did not request it.

No appeals or post-verdict motions have been filed yet. Those will come after sentencing, which takes place Friday, Jan. 7, at 10 a.m. ET. Court TV will carry the proceedings live.

The sentence ranges for each conviction are as follows: