(WXYZ) — What happened to Dee Warner? The mother of five from Tecumseh, Michigan has been missing more than a year.

Many of Dee’s relatives say they believe Dee Warner is no longer alive, and they want justice.

“I don’t know how you prepare for the outcome,” said Rikkell Bock, Warner’s daughter.

Bock says she needs to know what happened to her mom, even if the news is bad.

“At this point, we’ve gone a year not knowing. Not knowing is so much worse than knowing,” said Bock.

Dee was last seen on April 25, 2021 at her home in Tecumseh. In the last year, Dee’s four adult children and her brother have spent every waking moment trying to find out what happened to the 52-year-old.

“There is absolutely no way she would have gone a year without any communication,” said Bock.

The Lenawee County Sheriff’s office, along with the Michigan State Police and the FBI have searched Dee’s home and farm, as well as her trucking and fertilizer businesses. They’ve used sonar, drones, cadaver dogs, and they’ve even dug up fields looking for clues. 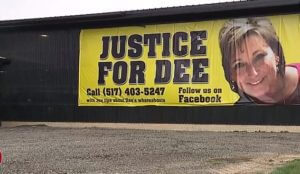 “She had reached bottom with the marriage and decided OK, this was it – it was time to get out,” said Little.

Little says several witnesses say Dee and Dale had argued about one of their businesses the day before – and they say she was planning to ask her husband for a divorce that night. Little says she even sent their then-9-year-old daughter to stay with a friend for the evening. Little says phone records show that friend sent Dee a text at 10:24 pm to ask how she was doing. 29 minutes later the friend received a text that simply said “K.”

“She was very talkative, very expressive, she texted a lot. Never once, not one single time was her response the letter ‘K.’ So after the friend says ‘how are you doing,’ no response – half an hour later, the letter K, and the phone gets turned off,” said Little. Little says he believes Dee wasn’t the one that sent the response ‘K.’

Bock arrived at her mom’s home the next morning and quickly grew worried when she couldn’t find her.

“I just felt something was not right,” said Bock.

After searching for hours, they called the Lenawee County Sheriff.

“The more information that started to come out, especially after a few days, the more we were concerned,” said Sheriff Troy Bevier.

Bevier says even though it’s been a year since Dee disappeared, this is not a cold case. He says his detectives have kept an open mind, but they have told Dee’s husband that he is a person of interest in the case.

“Did your client kill his wife,” asked Catallo.

“Did he have anything to do with her disappearance,” asked Catallo.

“No,” said Leib. “Dale Warner has been open, he’s been available, he’s been talked to. The FBI, the state police, the sheriff’s department have all visited his house on multiple occasions. They visited his office, they visited the fields where he works. They visited his barn and his warehouse, they found not one piece of evidence to suggest in any way that he or anybody around him was in any way connected to her disappearance. Nothing.”

Leib says Dale believes Dee took off and wants her to come home. The Sheriff says Dee’s vehicles were still at the house, and there has been no credit card activity in the last year. He says her passport has not been used either. Dee’s family maintains that she would never leave without her youngest child.

“My mom doesn’t have a voice. For a year. And it’s not fair for her. So it gives me the strength to keep going and fight for her, because I know she would have done that for anybody that she knew,” said Bock.

Attorney Billy Little made several announcements about his investigation into Dee’s disappearance Sunday on a podcast on YouTube.

In response to Little’s presentation, Sheriff Bevier released this statement:

“In response to information recently presented by or on behalf of Dee Warner’s Family; this is an open and ongoing active investigation and I will not comment on specifics of the case. The Task Force comprised of the Lenawee County Sheriff’s Office, the Michigan State Police and the FBI have been working every day to determine the truth about what happened to Dee, find closure for the family and hold those responsible accountable.”

This story was originally published May 9, 2022 by WXYZ in Detroit, an E.W. Scripps Company.