Connerjack Oswalt was reported missing by the Clearlake Police Department on Sep. 29, 2019, with his last known sighting in nearby Willows, California roughly one week later. He was 16 years old at the time.

“We’ve had a lot of false hope over the last two and a half years,” Gerald Flint, Oswalt’s stepfather, told KSTU.

Oswalt was diagnosed with autism in 2014. His family had been searching for him since his disappearance by scanning posts for unidentified individuals and even checking morgues.

Recently, members of the Park City community started reporting an individual in the area who had been seen pushing a shopping cart. Summit County Sheriff’s Office deputies came in contact with the man a few times, but since he hadn’t been committing a crime, they checked on his well-being but never learned his name.

Over the weekend, the dispatch center received a call for a man sleeping outside of a store in Jeremy Ranch.

“Deputies [were] dispatched early in the morning, and it’s the same individual we’ve been dealing with the past couple of weeks,” said Sheriff Martinez, who then described the man’s condition that day. “This morning, he’s very cold, he’s shivering, he’s obviously had a rough night.” 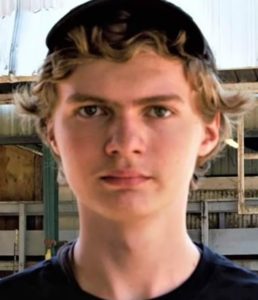 This image provided by the The National Center for Missing and Exploited Children shows Connorjack Oswalt. (NCMEC)

Deputies were able to convince the man to warm up in the front seat of one of their police vehicles. The man consented to a finger scan since he wouldn’t tell deputies his name. The scan came back with a warrant hit out of Nevada for Connerjack Oswald.

“The deputies again felt there’s more to this story; there’s something more. This individual’s being resistant, reluctant to communicate,” said Sheriff Martinez,

Dispatchers began combing through the National Center for Missing and Exploited Children database.

“After about 16 pages of scouring through names and photographs and trying to find something that might match up, came up with the name Connerjack Oswalt,” Martinez said.

The spelling of Oswalt’s last name was different in both methods of research. However, once they felt confident with the identification, they were able to contact his family, who had moved from California to Idaho after their home was badly damaged in a wildfire.

Flint drove from Idaho Falls to Park City to meet with deputies and was able to positively identify Oswalt.

Flint called his wife Suzanne, Oswalt’s mother, and told her the news.

“There wasn’t a dry eye in the room, and we’re talking law enforcement, family members, they had been reunited with this individual they haven’t seen for three years when he was 16. He’s now 19,” said Sheriff Martinez.

Oswalt’s mother and stepfather shared how difficult the last few years have been without knowing the status of their son.

“We’re just grateful that he’s safe and he’s alive and we have our son back. That’s the most important thing ever for us,” said Suzanne Flint.

“To find him alive is incredible,” Gerald Flint added.

“It’s the compassion, it’s the empathy, it’s looking at the bigger picture and feeling that there’s something here,” Sheriff Martinez said of his deputies. “Although he had a warrant, there was a something deeper that these individuals — my deputies — felt like they needed to explore.”

Oswalt is now safe in a treatment facility and his family is relieved to know that he is OK.

After learning of the positive outcome, the Clearlake Police Department shared a statement with KSTU:

“It was great news for us at the Clearlake Police Department to hear Conner was located safe by the Summit County Sheriff’s Office.  We hope Conner’s family can get some much-needed relief knowing he is okay.”

April is Autism Awareness Month. On Wednesday, the Summit County Sheriff’s Office rolled out the Autism Safety Program on their website, encouraging members of their community to share information about their loved ones dealing with autism or other illness.

“Rapid access to information such as their name, birthday, physical description, emergency contact information, known triggers and behaviors, etc. will help Officers during their initial response,” reads a statement on the website. “Please share all information you feel comfortable providing. This form should be filled out yearly to ensure accurate information is available for first responders.”

This story was originally published April 16 by KSTU in Salt Lake City, an E.W. Scripps Company.