KANSAS CITY, Mo. (AP) — A Kansas City man who has been jailed for more than 40 years for a triple murder adamantly and repeatedly denied having anything to do with the crime during testimony Monday in an evidentiary hearing that could lead to his freedom.

“I had absolutely nothing to do with these murders. By no means was I anywhere close to that crime scene,” said Kevin Strickland, adding he has been working toward his freedom since he was convicted and sentenced to life in prison in 1979. 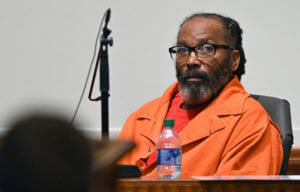 Kevin Strickland answers questions during an evidentiary hearing regarding his innocence on Monday, Nov. 8, 2021 in Jackson County Circuit Court in Kansas City, Mo. Many people, including Baker, believe Strickland was wrongly convicted of a triple murder in 1978. Strickland has been incarcerated for the past 43 years. (Tammy Ljungblad/The Kansas City Star via AP)

Jackson County Prosecutor Jean Peters Baker and other legal and political leaders say Strickland was wrongfully convicted, and Peters Baker has been working to free him. She said evidence used to convict him had been recanted or disproven since his trial.

“This is a triple murder in which three young people were executed,” Peters Baker said Monday. “The tragedy was made much, much worse by Kevin Strickland’s conviction.”

Under questioning from Peters Baker and his personal attorney, Robert Hoffman, Strickland said he had “absolutely nothing to do with these murders.”

The evidentiary hearing in Strickland’s case comes after months of delays caused by legal procedures and canceled hearings prompted mostly by motions filed by the state attorney general’s office. Attorney General Eric Schmitt, a Republican running for the U.S. Senate, has said he believes Strickland is guilty of the murders.

Strickland, a Black man, saw his first trial end in a hung jury when the only Black juror, a woman, held out for acquittal. After his second trial in 1979, he was convicted by an all-white jury of one count of capital murder and two counts of second-degree murder.

Strickland has always maintained that he was home watching television and had nothing to do with the killings, which happened when he was 18 years old.

On Monday, Strickland denied suggestions that he offered Douglas $300 to “keep her mouth shut,” and said he had never visited the house where the murders occurred before they happened.

Strickland said he went to the scene at the request of a friend who was the sister of Vincent Bell, who was later convicted in the killings along with Strickland. He said he cooperated with officers at the scene and later at the police station because he “knew the system worked and I would not be convicted of something I didn’t do.”

Strickland, who has spinal stenosis, was brought in a wheelchair Monday morning into a room near where the hearing was about to begin. Asked how he felt, he said, “scared.”

A hearing scheduled for Sept. 2 was delayed after Schmitt’s office sought more time for the court to hear several motions his office filed in the case.

Schmitt sought to have all 16th Circuit judges in Jackson County recused from presiding over the evidentiary hearing because the presiding judge in that circuit had said he agreed that Strickland was wrongfully convicted.

The Missouri Supreme Court ruled Sept. 30 that the Jackson County judges should be recused from the hearing to avoid any suggestions of impropriety or bias, delaying another hearing. Retired Senior Judge James Welsh was then appointed to preside over the case.