GEAUGA COUNTY, Ohio (WEWS) — An Ohio woman accused of putting her newborn baby, umbilical cord still attached, in a garbage bag and leaving it in the woods in 1993 has been found guilty of murder.

The defendant, Gail Eastwood-Ritchey, was also found not guilty of aggravated murder.

“The jury’s verdict in this case, by saying it was only a purposeful killing and rejecting the aggravated murder, the jury said that she did not have the plan ahead of time to kill the child. In common parlance, it was not a premeditated killing,” said Michael Benza, a senior professor of law at Case Western Reserve University.

The judge revoked her bond and she was arrested at the conclusion of the trial. A sentencing date has not been set yet.

“I was, in fact, one of the first ones on the scene that day. It’s just very rewarding to see that justice has been served,” he said. “We are not going to give up. We have cases like this. We have great people who are going to investigate them to the conclusion.”

Hildenbrand said that he never lost hope that investigators would arrest and convict the person responsible for the baby’s death.

“Just the fact she got arrested that was closure. At that point, we found out who the baby’s mother was and we were bringing her to justice and this [guilty verdict] just ends this because she did a horrible thing,” he said.

On March 25, 1993, a newborn baby was found near Sidley Road in Thompson Township. The child was partially dismembered and still had his umbilical cord attached. Authorities said the child had been placed in a trash bag and left in a wooded area but was dragged to the side of the road by animals.

The case was coined “Geauga’s Child,” a cold case that haunted authorities for decades.

Sheriff deputies stated that familial DNA from a voluntary ancestry online database was used to track Ritchey down. They identified distant family members in 2018.

Detectives used the same techniques that allowed authorities to track down the Golden State Killer. Authorities said the case is the 51st in the nation to be potentially solved using familial DNA techniques. 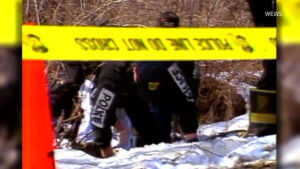 At the time of her arrest in 2019, she admitted to giving birth to the child, placing him in a bag and leaving him in the woods.

Her defense team argued that she shouldn’t be convicted of murder because the baby was not alive at the time of the murder, but the state argued he was alive. In the end, the jury agreed with the prosecution.

According to the sheriff’s office, Ritchey also confessed to committing a similar crime with another child in 1991 in Cuyahoga County, two years prior to police finding Geauga’s Child.

Investigators say Ritchey is still married to the baby’s father, but that she hid the pregnancy from everyone. They say Ritchey now has three grown children.

This story was originally published April 4, by WEWS in Cleveland, an E.W. Scripps Company.