COLORADO SPRINGS, CO (KOAA) — An affidavit reveals new details about the events that led up to the disappearance of Kara Nichols.

According to the affidavit, Paul Nichols reported his daughter missing to Deputy Ayyad with the El Paso County Sheriff’s Office on Oct. 14, 2012. He went on to state that his son Terrance Nichols lived in Colorado Springs and was the last known person to have contact with Kara on Oct. 9, 2012. 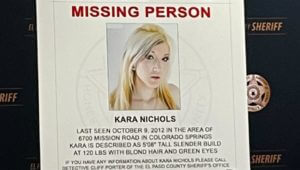 Deputy Ayyad contacted Terrance where he stated that he received a call from Kara around 11:45 p.m. on Oct. 9, 2012. In the phone call, she said she was on the way to Denver for a modeling assignment.

After that phone call with Kara, Terrance attempted to call her the next day but his phone call went straight to voicemail as if her phone was off or dead.

While at her house, Terrance saw Kara’s cell phone charger, laptop and other necessities in her room.

A missing person alert was then put out for Kara by the El Paso County Sheriff’s Office.

Detective Gugliotta was originally assigned to the case on Feb. 4, 2013, and it was determined that Kara was placing ads to be an escort.

One ad was posted on Oct. 9, 2012, at 7:28 p.m. that showed Kara in lingerie advertising herself and added her number for people to call.

Detective Gugliotta stated he wasn’t aware of any contact with Kara after 11:59 p.m. 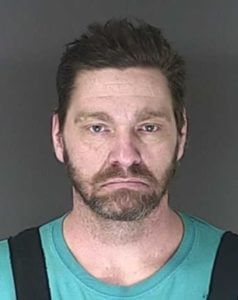 On May 8, 2013, Detective Gugliotta received a returned call from a man who identified himself as Joel Hollendorfer.

When asked if the phone belonged to Hollendorfer on Oct. 9, 2012, he said yes.

Detective Gugliotta said he was investigating a missing person case and his number was on the list of records the night she went missing.

Hollendorfer said he was seeking escort services that night and answered Kara’s ad saying they spoke several times that night but he was looking to go to her but she only went to locations.

Hollendorfer went on to say that they never met on that night.

Investigations volunteer Mark Oldfield was able to track Kara’s phone movements the night of Oct. 9 to its last known usage in the early hours of Oct. 10, 2012.

Oldfield was able to determine that Kara left her Colorado Springs house at approximately 11:16 p.m. and traveled the following route:

Based on Kara’s phone activity, her phone was at the intersection of Woodmen and Black Forest Road at 11:33 p.m., consistent with Hollendorfer’s well-traveled route to Burgess Road.

Based on the last known activity from Kara’s phone, it led them to the address of Hollendorfer’s parents.

Multiple agencies participated in the search, including cadaver dogs.

Hollendorfer’s mother, Betty, walked the property with members from the search team and pointed out numerous locations where animals may be buried since purchasing the property in 1985.

None of the burial locations were excavated in 2014.

Betty Hollendorfer suggested investigators should search the property across the street, which Hollendorfer had access to.

The homeowners gave permission to search and ultimately, cadaver dogs narrowed in on a shallow grave.

The area was excavated and it was apparent that roots were dug up at the site and a hole had been dug to about the size of a human body but there were no human remains.

During an interview on Oct. 21, 2014, Hollendorfer confirmed looking up Kara, wanting to meet with her, and communicating with her.

He further explained Kara never met him at the location they talked about. They were supposed to meet near Galley and Powers.

Hollendorfer added that he had been involved with escorts many times, which he says is why his marriage ended.

He also added that he was heavily involved in escorts and drugs at that time.

Ultimately, Hollendorfer denied ever meeting Kara nor that she entered his vehicle.

However, on Feb. 1, 2022, FBI Special Agents Brandon Prete and Michael Willis interviewed Kristina and she stated that after Hollendorfer’s father died in Nov. 2014, he admitted to her that he accidentally killed an escort he hired and buried her body on top of an old horse grave on his parent’s property.

During the interview, Kristina stated that Hollendorfer admitted to accidentally strangling Kara to death and then burying her on an old horse grave with plastic bags and limes.

Kristina went on to say that Hollendorfer stated he felt responsible for his father’s death as he told him about killing Kara.

Kristina believed his parents knew he killed Kara and that they were covering for him.

On Feb. 7, 2022, Hollendorfer was taken into custody on an unrelated charge.

During an interview, Hollendorfer again denied meeting Kara and being responsible for her death.

Hollendorfer was also asked to identify all the spots where horses had been buried and when asked about a specific location that was previously identified, he described it as a “dry patch with a high spot” and that nothing was buried there.

During a separate interview with Hollendorfer’s Mom, she was asked about the same location and said it was where her favorite horse “Milo” was buried.

An FBI Evidence Response Team and detectives with the El Paso County Sheriff’s Office began searching the property after obtaining a search warrant that was issued on Feb. 3, 2022.

They searched that specific site and approximately three feet down they found black plastic believed to be a garbage bag. During the excavation, they found a human hand and remains.

During his advisement hearing, Hollendorfer’s bond was increased from $50,000 to $1 million and he was ordered to surrender his passport and was deemed a flight risk due to his previous Failure to Appear Charges.

Hollendorfer’s next court appearance is scheduled for Thursday, February 17.

Police later confirmed that the remains were positively identified as Kara Nichols.

This story was originally published Feb. 10, 2022, by KOAA in Colorado Springs, an E.W. Scripps Company.