Lauren Salzman was sentenced in Brooklyn federal court to five years probation for her role in the scandal-ridden, cult-like secret society of brainwashed women, who included millionaires and actors. The judge also ordered her to perform 300 hours of community service. 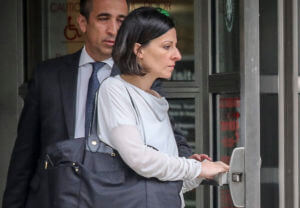 In a letter two weeks ago to Judge Nicholas G. Garaufis, prosecutors noted that her guilty plea to racketeering would normally call for a sentence of seven to nine years in prison. But they cited her “credible, detailed” testimony against Raniere at his 2019 trial as reason for leniency.

Salzman, a one-time member of NXIVM’s executive board who pleaded guilty and agreed to become a government cooperator, was one of two witnesses to testify at Raniere’s trial about submitting to a barbaric ritual meant to show his slaves devotion to him.

Salzman testified about being held down in 2017 while another Raniere devotee used a cauterizing pen to etch his initials into an area near her pelvis, describing a bizarre initiation procedure.

“Master, please brand me. It would be an honor,” she recalled saying just before she was branded.

She testified that it was “the most painful thing I’ve ever experienced.”

She also testified that she organized other brandings, inviting women to her house, where they were required to strip naked and sit blindfolded in a circle as part of the ritual.

The first woman branded, she said, “was screaming and squealing.”

In a letter to the judge prior to her sentencing, Salzman wrote: “I wish I could take my participation back. I wish I had been stronger and seen things sooner. … I can’t even begin to imagine the pain, feelings of betrayal, feelings of violation and lasting emotional trauma that the victims have experienced.”

At sentencing, she apologized to NXIVM’s victims.

Salzman’s attorney, Hector J. Diaz, said after her sentencing that his client “looks forward to closing a very difficult and incredibly unfortunate chapter to her life. Today marked another step toward this goal.

He added: “She wants to be respectful of the victims in this case and will not make further statements at this time. She looks forward to living a private and productive life.”

Last October, Garaufis sentenced Raniere to 120 years in prison for turning some adherents into sex slaves branded with his initials and sexually abusing a 15-year-old.

At Raniere’s sentencing, 15 victims called for a lengthy prison term.

Last month, “Smallville” actor Allison Mack was sentenced to three years in prison for her role in NXIVM. Prosecutors said she cooperated with the prosecution after pleading guilty in the case.

Without cooperating, Mack would have faced between 14 and 17 1/2 years behind bars, according to federal sentencing guidelines.

Her sentence included prison time after prosecutors said she became a “master” for “slaves” she ordered “to perform labor, take nude photographs, and in some cases, to engage in sex acts with Raniere.”

Last September, Seagram’s liquor fortune heir Clare Bronfman was sentenced to six years and nine months in prison for her role as an unwavering benefactor to Raniere.

As authorities closed in on Raniere, he fled to Mexico with Mack and others to try to reconstitute the group there. He was arrested and sent to the United States in March 2018; Mack was arrested a few days later.