NEW YORK (AP) — An heir to the Seagram’s liquor fortune was sentenced Wednesday to an 81-month prison term and immediately thrown behind bars for her role as an unwavering benefactor of Keith Raniere, the disgraced self-improvement guru convicted of turning women into sex slaves who were branded with his initials.

U.S. District Judge Nicholas Garaufis gave Clare Bronfman the harsh sentence at a hearing lasting more than three hours and featuring emotional statements from several victims gathered in a courtroom under strict coronavirus safety protocols. The judge repeatedly scolded Clare Bronfman for standing by Raniere and his upstate New York organization, even after the evidence made clear she eventually became aware of his sex-trafficking scheme.

With that knowledge, she “could have distanced herself from him,” the judge said, his bench fitted with a sheet of plexiglass. “Instead, she chose to double down on her support of Raniere.”

Before hearing the sentence, the 41 year-old Bronfman had told the judge in a soft voice that she was thankful for the prayers of her supporters.

“It doesn’t mean I haven’t made mistakes because I have made mistakes,” said Bronfman without mentioning Raniere.

The sentence far exceeded the three years probation sought by the defense and even the five years the government wanted for Bronfman, who had been under home confinement. She also was fined $500,000.

Bronfman, 41, admitted in a guilty plea last year that she harbored someone who was living in the U.S. illegally for unpaid “labor and services” and that she committed credit card fraud on behalf of Raniere. But her lawyers had argued she deserved leniency because she had no direct involvement in the case’s most disturbing allegations against the 60-year-old Raniere. 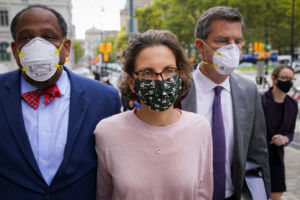 Clare Bronfman arrives at federal court, Wednesday, Sept. 30, 2020, in the Brooklyn borough of New York. Bronfman, the Seagram’s liquor fortune heir and a wealthy benefactor of Keith Raniere, the disgraced leader of self-improvement group NXIVM in upstate New York convicted of turning women into sex slaves who were branded with his initials, faces sentencing Wednesday in the federal conspiracy case. (AP Photo/John Minchillo)

At trial where Rainere was found guilty last year, prosecutors told jurors his organization, NXIVM — pronounced NEHK-see-uhm — operated like a cult whose members called him “Vanguard.” To honor him, the group formed a secret sorority comprised of brainwashed female “slaves” who were branded with his initials and forced to have sex with him, the prosecutors said.

Bronfman had long been affiliated with NXIVM, giving away tens of million of dollars to bankroll Raniere and his program of intense self-improvement workshops that prosecutors labeled a pyramid scheme. Ex-followers told the judge on Wednesday that for years, Bronfman has used her wealth to try to silence NXIVM defectors.

Barbara Bouchey, a former Raniere girlfriend who worked as a financial planner for Bronfman before quitting the group, described how Bronfman used lawyers to threaten litigation and seek false criminal charges. She claimed the harassment has continued even as the defendant was approaching sentencing.

“You’ve been under house arrest for two years, yet you have never stopped,” Bouchey said through tears. “Will you never stop?”

A victim of the forced-labor scheme, an immigrant who didn’t give her name, described how Bronfman lured her into the group with the promise of a good job, only to find herself being threatened with visa problems if she didn’t do menial chores for little pay and endure Raniere’s exploits.

At one point, Bronfman addressed the woman directly, saying, “I truly hope you can forgive me and live a happy life.” The judge berated Bronfman for the remark while imposing the sentence, suggesting it fit an unchecked pattern of manipulation that left him “speechless.”

Along with Bronfman, Raniere’s teachings won him the devotion of Hollywood actresses like Allison Mack of TV’s “Smallville.” Mack also has pleaded guilty and, like Rainere, is awaiting sentencing.

As part of a plea agreement, Bronfman agreed to forfeit $6 million from a fortune prosecutors have said is worth $200 million.