Paulette Loftin, Crumbley’s attorney, said that he was remorseful for the shooting, which killed four students and injured seven other people, including a teacher.

Loftin said that there is more information expected to come out in a hearing that is scheduled before sentencing. That hearing has to happen since Crumbley is under the age of 18.

She was also asked about any communication she has had, which she could not speak about due to attorney-client privilege.

She did say that she thought Crumbley made the right decision in the plea. 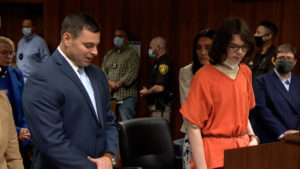 Ven Johnson, an attorney who represents some of the families of the victims in the shooting, also spoke and released a statement following the plea hearing.

“Ethan Crumbley’s guilty plea is one small step forward on a long path towards obtaining full justice for our clients. We will continue to fight until the truth is revealed about what went wrong leading up to this tragedy, and who, including Crumbley’s parents and multiple Oxford Community Schools employees, could have and should have prevented it,” said attorney Ven Johnson, who is representing several victim families.

“I want to be very clear, there were no plea negotiations, no plea offers, no reductions and no sentencing agreements,” said Oakland County Prosecutor Karen McDonald.

Bouchard said the plea was something that needed to happen.

“It will never make our victims whole, obviously their lives have been inextricably and permanently altered,” said Bouchard.

This story was originally published Oct.24, 2022 by WXYZ in Detroit, an E.W. Scripps Company.