PORTLAND, Ore. (AP) — Criminal defendants in Oregon who have gone without legal representation for long periods of time amid a critical shortage of public defense attorneys filed a lawsuit Monday that alleges the state violated their constitutional right to legal counsel and a speedy trial.

The complaint, which seeks class-action status, was filed as state lawmakers and the Oregon Office of Public Defense Services struggle to address the huge shortage of public defenders statewide. 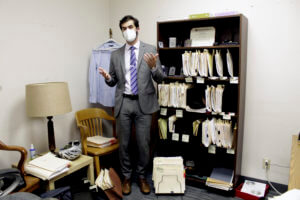 FILE – Public defender Drew Flood with the nonprofit law firm Metropolitan Public Defender looks his files for the criminal cases he is currently working on in Portland, Ore., on May 5, 2022. (AP Photo/Gillian Flaccus, File)

The crisis has led to the dismissal of dozens of cases and left an estimated 500 defendants statewide — including several dozen in custody on serious felonies — without legal representation. Crime victims are also impacted because cases are taking longer to reach resolution, a delay that experts say extends their trauma, weakens evidence and erodes confidence in the justice system, especially among low-income and minority groups.

“There is a public defense crisis raging across this country,” said Jason D. Williamson, executive director of the Center on Race, Inequality, and the Law at New York University School of Law, who helped prepare the filing. “But Oregon is among only a handful of states that is now entirely depriving people of their constitutional right to counsel on a daily basis, leaving countless indigent defendants without access to an attorney for months at a time.”

The lawsuit specifically names Gov. Kate Brown and Stephen Singer, the recently appointed executive director of the state’s public defense agency, and asks for a court injunction ordering criminal defendants to be released if they can’t be provided with an attorney in a reasonable period of time. The lawsuit doesn’t specify what would be considered “reasonable.”

Singer said he could not comment until he had fully reviewed the lawsuit. Brown’s office declined to comment on pending litigation. 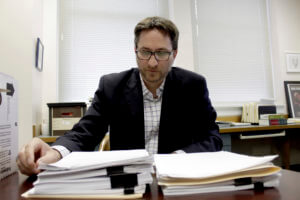 FILE – Carl Macpherson, executive director at Metropolitan Public Defender, examines the file in a double murder case that was recently pushed back for trial in his office in Portland, Ore., on May 5, 2022. (AP Photo/Gillian Flaccus, File)

Oregon’s system to provide attorneys for criminal defendants who can’t afford them was underfunded and understaffed before COVID-19, but a significant slowdown in court activity during the pandemic pushed it to a breaking point. A backlog of cases is flooding the courts and defendants routinely are arraigned and then have their hearing dates postponed up to two months in the hopes a public defender will be available later.

A report by the American Bar Association released in January found Oregon has 31% of the public defenders it needs. Every existing attorney would have to work more than 26 hours a day during the work week to cover the caseload, the authors said.

Similar problems are confronting states from New England to Wisconsin to New Mexico as systems that were already overburdened and underfunded grapple with attorney departures, low funding and a flood of pent-up demand as COVID-19 precautions ease. Missouri eliminated a waiting list for public defenders after being sued in 2020 and Idaho is also in litigation over a public defense crisis. 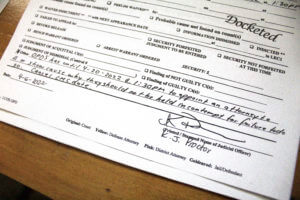 Courtroom notes showing that a Washington County, Ore., judge threatened to hold Oregon Public Defense Services in contempt of court for not providing a public defender to a criminal defendant are seen in this May 4, 2022, photo. The defendant in this case is charged with rape, sodomy and other sexual crimes and was finally assigned a public defender this week after weeks without one, prompting the judge’s action. A post-pandemic glut of delayed cases has exposed shocking constitutional landmines impacting defendants and crime victims alike in Oregon, where an acute shortage of public defenders has even led judges to dismiss serious cases. (AP Photo/Gillian Flaccus)

The Oregon complaint focuses on four plaintiffs who have been without legal representation for more than six weeks, including a man who can’t afford his bail but has been jailed for 17 days without an attorney and can’t seek a bail hearing without representation.

In two other cases, the lawsuit alleges, plaintiffs were released from custody after their arrest and told to call a number to be assigned a defense attorney. They left voicemails and called repeatedly and have not had any reply, the complaint says. They show up for hearings alone and have their cases pushed back because no public defenders are available.

Jesse Merrithew, an attorney representing the plaintiffs, said not having legal representation right after an arrest causes a cascade of problems for criminal defendants that are almost impossible to overcome later on. One such example, he said, is the ability to secure any surveillance video that could back up the defendant’s case because looping security videos are often erased after days or weeks.

“The time directly after arrest is the most critical time, as any criminal defense lawyer will tell you, in the representation of a client,” he said. “It’s unacceptable to allow a delay in the employment of the council for weeks or months on end.”

The shortage of public defenders also disproportionately affects Black defendants, the lawsuit alleges. Studies in the Portland area in 2014 and 2019 showed that 98% and 97% of Black defendants, respectively, had court-appointed lawyers in those years, whereas 91% of White defendants had them.

In the current crisis, 23% of people waiting for an attorney were Black statewide on a recent day, despite the fact that Black people overall make up 3% of Oregon’s population.

“The state’s failure in this regard requires urgent action. But the problem cannot be solved with more attorneys,” said Ben Haile, an attorney with the Oregon Justice Resource Center who is representing the plaintiffs. “There are effective alternatives to prosecution of many of the people caught up in the criminal justice system that would make the public far safer at lower cost and with less collateral damage to the families of people facing prosecution.”

Public defenders warned that the system was on the brink of collapse before the pandemic.

In 2019, some attorneys even picketed outside the state Capitol for higher pay and reduced caseloads. But lawmakers didn’t act and months later, COVID-19 crippled the courts. There were no felony or misdemeanor jury trials in April 2020 and access to the court system was greatly curtailed for months, with only limited in-person proceedings and remote services provided.

The situation is more complicated than in other states because Oregon’s public defender system is the only one in the nation that relies entirely on contractors. Cases are doled out to either large nonprofit defense firms, smaller cooperating groups of private defense attorneys that contract for cases or independent attorneys who can take cases at will.

Now, some of those large nonprofit firms are periodically refusing to take new cases because of the overload. Private attorneys — they normally serve as a relief valve where there are conflicts of interest — are increasingly also rejecting new clients because of the workload, poor pay rates and late payments from the state.