FORT LAUDERDALE, Fla. (AP) — A divided jury spared Florida school shooter Nikolas Cruz the death penalty Thursday for killing 17 people at a Parkland high school in 2018, sending him to prison for the rest of his life in a decision that left many families of the victims angered, baffled and in tears.

“This is insane. Everyone knows right?” Chen Wang, 14-year-old shooting victim Peter Wang’s cousin, yelled during a news conference after the decision was read. “We need justice.”

Cruz, 24, pleaded guilty a year ago to murdering 14 students and three staff members, and wounding 17 others, at Marjory Stoneman Douglas High School on Feb. 14, 2018.

The three-month trial included graphic videos and photos from the massacre and its aftermath, heart-wrenching testimony from victims’ family members and a tour of the still blood-spattered building. The jury rejected the death penalty after deliberating for about seven hours over two days. 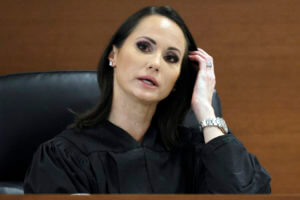 Judge Elizabeth Scherer announces that the murder weapon will go back to the jury room to be available during jury deliberations in the penalty phase of the trial of Marjory Stoneman Douglas High School shooter Nikolas Cruz at the Broward County Courthouse in Fort Lauderdale, Fla. on Thursday, Oct. 13, 2022. (Amy Beth Bennett/South Florida Sun Sentinel via AP, Pool)

Cruz’s lead public defender, Melisa McNeill, told the jury during her closing argument Tuesday that life in prison would still be a horrible punishment and suggested that other prisoners might target him.

But that wasn’t enough for many family members, who went before television cameras, one by one, to express their shock and anger at the jury’s decision. Some called Cruz a “monster,” while others cried.

“We are beyond disappointed with the outcome,” said Lori Alhadeff, whose 14-year-old daughter, Alyssa, was killed. “This should have been the death penalty, 100%. … I sent my daughter to school and she was shot eight times. … I cannot understand. I just don’t understand.”

Under Florida law, a death sentence requires a unanimous vote on at least one count. The seven-man, five-woman jury unanimously agreed there were aggravating factors to warrant a possible death sentence, such as agreeing that the murders were “especially heinous, atrocious, or cruel.”

But one or more jurors also found mitigating factors, such as untreated childhood issues. In the end, the jury could not agree that the aggravating factors outweighed the mitigating ones, so Cruz will get life without parole.

Circuit Judge Elizabeth Scherer will formally issue the life sentences Nov. 1. Relatives, along with the students and teachers Cruz wounded, will be given the opportunity to speak. 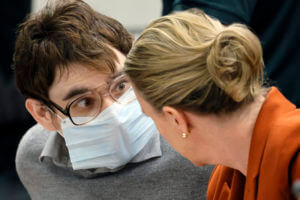 Marjory Stoneman Douglas High School shooter Nikolas Cruz appears surprised as he is seated at the defense table for the verdict in his trial at the Broward County Courthouse in Fort Lauderdale, Fla., on Thursday, Oct. 13, 2022. Cruz will be sentenced to life without parole for the 2018 massacre of 17 people at Parkland’s Marjory Stoneman Douglas High School. That sentence comes after the jury announced Thursday that it could not unanimously agree that Cruz should be executed. (Amy Beth Bennett/South Florida Sun-Sentinel via AP, Pool)

Cruz, his hair unkempt, largely sat hunched over and stared at the table as the jury’s decisions were read. Rumblings grew from the family section — packed with about three dozen parents, spouses and other relatives of the victims — as it became apparent the jury was not going to recommend the death penalty. Many shook their heads or covered their eyes as the judge spent 50 minutes reading the jury’s decision for each victim. Some parents sobbed as they left court.

Jury foreman Benjamin Thomas, in an interview broadcast on local TV station WPLG, indicated more than one juror voted for life in prison.

“We went through all the evidence and some of the jurors just felt that was the appropriate sentence,” Thomas said. “I didn’t vote that way, so I’m not happy with how it worked out, but everyone has the right to decide for themselves.”

He said he feels bad for the families of victims and that “it hurt” to watch the decisions being read in court.

“This has been really hard on my heart … I’d rather not see anything like this ever again,” he said.

The jurors pledged during the selection process that they could vote for a death sentence, but some victims’ parents — some of whom attended the trial almost daily — wondered if all of them were being honest.

One of the jurors, sent a short handwritten note to the judge defending her vote for a life sentence, and denying that she intended to vote that way before the trial began.

“The deliberations were very tense and some jurors became extremely unhappy once I mentioned that I would vote for life,” she wrote. She did not explain her vote.

Multiple family members talked about the years they waited for justice. They thanked prosecutors for their work, but in the end, they said they got another blow. 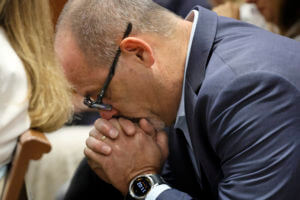 Fred Guttenberg reacts as he awaits a verdict in the trial of Marjory Stoneman Douglas High School shooter Nikolas Cruz at the Broward County Courthouse in Fort Lauderdale, Fla., on Thursday, Oct. 13, 2022. Guttenberg’s daughter, Jaime, was killed in the 2018 shootings. Cruz, who plead guilty to 17 counts of premeditated murder in the 2018 shootings, is the most lethal mass shooter to stand trial in the U.S. He was previously sentenced to 17 consecutive life sentences without the possibility of parole for 17 additional counts of attempted murder for the students he injured that day. (Amy Beth Bennett/South Florida Sun-Sentinel via AP, Pool)

Tony Montalto, father of 14-year-old Gina Montalto, expressed disbelief. He said the jury recognized that Cruz committed terrible acts, “shooting, some victims more than once on a pass, pressing the barrel of his weapon to my daughter’s chest. That doesn’t outweigh that poor little what’s-his-name had a tough upbringing?”

“Our justice system should have been used to punish this shooter to the fullest extent of the law,” he said.

WATCH: Victim Gina Montalto’s Dad: ‘The monster that killed them gets to live another day’

Michael Schulman, the stepfather of teacher Scott Beigel, said the decision gives anyone a license to kill, then claim mental illness as a defense. “This animal deserves to die. He hunted all of these people,” Schulman said. “He planned it for months.”

As he spoke to the media, Schulman held up a laptop with an image of Cruz in the school hallway with a gun. “The last thing my son saw was the gunman aiming at him,” he said.

Florida Gov. Ron DeSantis said that in a case like this, “where you’re massacring those students with premeditation in utter disregard for basic humanity … I just don’t think anything else is appropriate except a capital sentence.”

Just days after the shooting, Cruz’s defense had offered that he plead guilty in exchange for a life sentence. But then-Broward State Attorney Mike Satz rejected that. Satz appointed himself to be Cruz’s lead prosecutor.

Broward State Attorney Harold Pryor released a statement Thursday saying: “We have not shied away from telling all of the horror, all of the loss, all of the devastation, all of the pain, all of the facts, all of the truth. We hope that, while there is no such thing as closure, this will bring some measure of finality and justice to this terrible chapter.”

Gordon Weekes, Broward County’s public defender, said his team’s success in getting Cruz a life sentence is not something they will celebrate.

“Doing this work as a public defender, you know there will be difficult days and you may be subjected to trauma in order to prepare your case. But you set those things aside because of your oath, your commitment and the importance of this Constitution we all cherish,” Weekes said.

Cruz, a former student at the school, said he chose Valentine’s Day to make it impossible for Stoneman Douglas students to celebrate the holiday again.

Satz kept his case simple, focusing on Cruz’s eight months of planning, the seven minutes he stalked the halls of the three-story building, firing 140 shots with an AR-15-style semi-automatic rifle, and his escape. 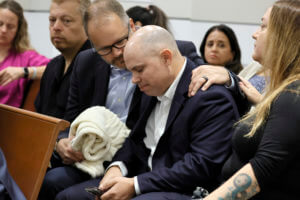 Ryan Petty comforts Ilan Alhadeff as they await the verdict in the trial of Marjory Stoneman Douglas High School shooter Nikolas Cruz at the Broward County Courthouse in Fort Lauderdale on Thursday, Oct. 13, 2022. Petty’s daughter, Alaina, and Alhadeff’s daughter, Alyssa, were killed in the 2018 shootings. A jury spared Cruz from the death penalty Thursday for killing 17 people at a Parkland high school in 2018, sending him to prison for the remainder of his life. (Amy Beth Bennett/South Florida Sun-Sentinel via AP, Pool)

He played security videos of the shooting and showed gruesome crime scene and autopsy photos. Teachers and students testified about watching others die. He took the jury to the fenced-off building, which remains blood-stained and bullet-pocked.

The defense team never questioned the horror inflicted, but focused on their belief that Cruz’s birth mother’s heavy drinking during pregnancy left him brain damaged and condemned him to a life of erratic and sometimes violent behavior that culminated in the shooting. His adoptive father died in front of him when Cruz was 5, leaving his adoptive mother alone and overwhelmed by his behavior, they argued. They also said he was raped by a 12-year-old neighbor when he was 9.

The prosecution contended that Cruz did not suffer from fetal alcohol damage but has antisocial personality disorder. Their witnesses said Cruz faked brain damage during testing and that he was capable of controlling his actions, but chose not to.

The massacre is the deadliest mass shooting to go to trial in the U.S. Nine other people in the U.S. who fatally shot at least 17 people died during or immediately after their attacks by suicide or police gunfire. The suspect in the 2019 massacre of 23 at an El Paso, Texas, Walmart is awaiting trial. 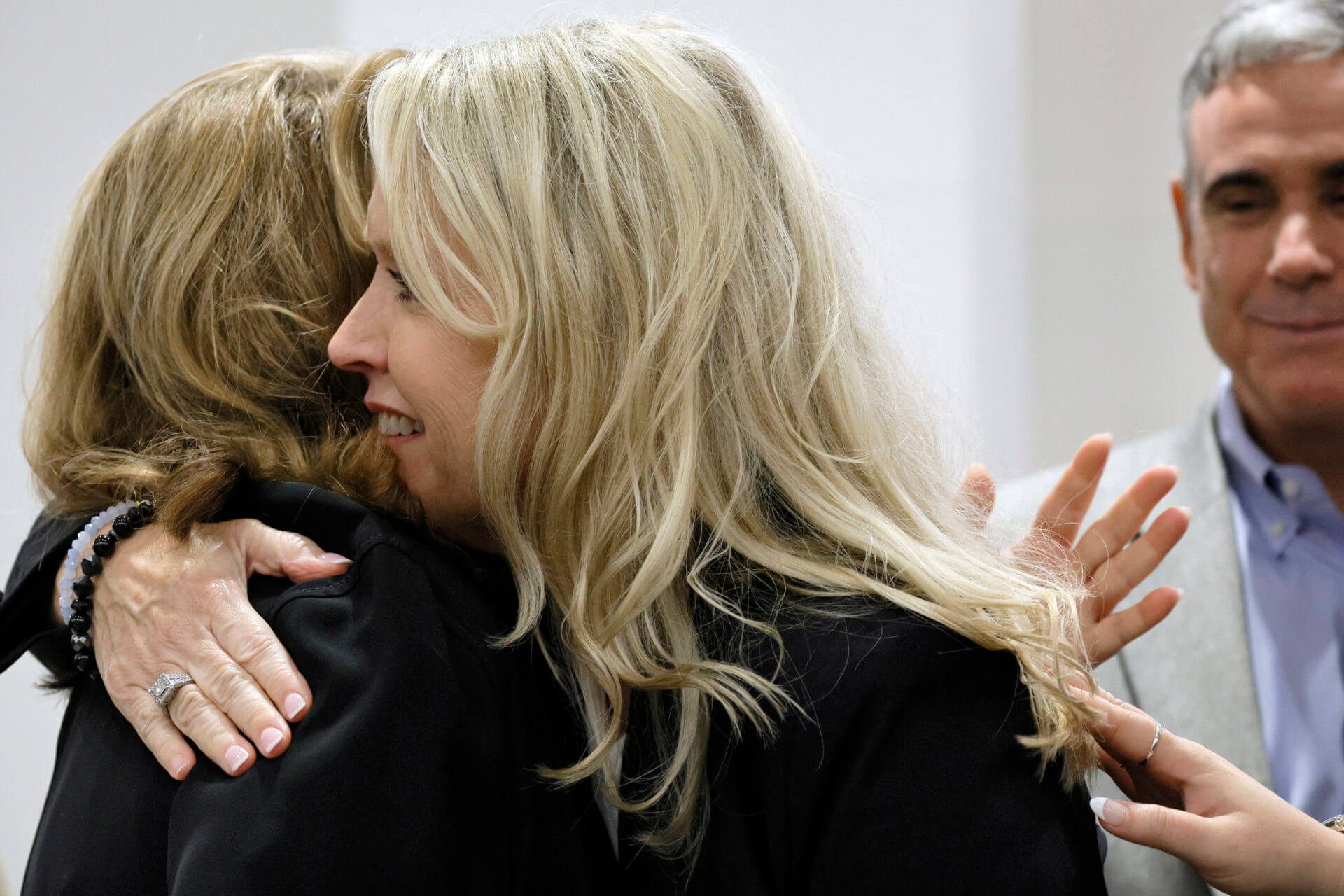