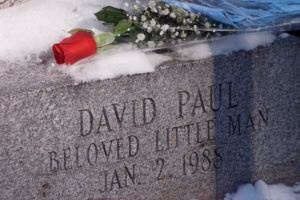 In this Jan. 2, 2001 photo, a rose is rests on the gravestone of David Paul at Walnut Grove Cemetery in Meriden, Conn. (Chris Angileri/Record-Journal via AP)

MERIDEN, Conn. (AP) — DNA testing has helped police identify the mother of an infant who was found frozen to death in a Connecticut parking lot in 1988, but she is not expected to face charges because of how long ago the crime was, authorities announced Tuesday.

Meriden Police Chief Jeffry Cossette said the mother was Karen Kuzmak Roche, who was 25 when the baby’s body was found wrapped in blankets on Jan. 2, 1988. Cossette said investigators believe the infant was left in the parking lot five days before he was found.

Roche is not expected to face criminal charges, Cossette said. He called the case one of manslaughter, which has a 20-year statute of limitations.

A message seeking comment was left at a phone listing for Roche on Tuesday.

Cossette said new DNA testing on samples from the blankets identified distant relatives of Roche and eventually led detectives to question her at her home on Jan. 2, the 32nd anniversary of the infant being found. Officials said she acknowledged she was the baby’s mother and was remorseful.

“Miss Roche indicated that she had been waiting 32 years for the day in which police would be knocking on her door,” Cossette said.

The case was cracked using a relatively new technique, which has been credited with helping solve cold cases across the country. It involves entering crime-scene DNA profiles into public genealogy databases, finding relatives of the person who left the DNA and building family trees that lead detectives to a suspect.

The same method led to the 2018 arrest of the so-called Golden State Killer, who authorities believe killed at least a dozen people and raped 50 women.

Roche told authorities that she called a fire department on Dec. 28, 1987, to report that they needed to search the parking lot for “something” but didn’t say it was a baby. Cossette said first responders did go to the parking lot but did not find anything.

She also told police that she was the only one who knew about her pregnancy, and she hid it with loose clothing.

The father was not identified, but officials believe he did not know anything about the pregnancy or the baby being abandoned.

Local clergy named the infant David Paul after his death, and community members donated money and services for his burial.

Meriden police worked with Identifinders International, which helps police and others identify people through DNA testing.