FAIRFAX, Va. (AP) — Johnny Depp’s ex-wife, Amber Heard, can argue to a jury that she should be protected from a libel lawsuit because her 2018 op-ed on domestic violence deals with a matter of public interest, a judge ruled Thursday.

Depp sued Heard for libel in Virginia after The Washington Post published her opinion piece. Depp’s lawyers say the article falsely implies she was physically and sexually abused by Depp when the actors were married.

At a Fairfax County courthouse Thursday, Depp’s lawyers sought a ruling that Heard could not invoke a Virginia law in her defense designed to protect people from nuisance lawsuits when they speak about matters of public concern.

Depp’s lawyer, Benjamin Chew, said the law, known as an anti-SLAPP provision (Strategic Lawsuit Against Public Participation), is not designed to interfere with private disputes, like Depp’s contention that his ex-wife defamed him.

Heard’s lawyer, Elaine Bredehoft, argued the article in question does not even mention Depp by name, and that it addresses a very serious issue of public concern: preventing domestic violence.

The judge, Penney Azcarate, ruled against Depp, who had sought to bar Heard’s lawyers from claiming immunity. Her ruling does not mean Heard has immunity for what she wrote, but simply that she can make that argument to a jury as part of her defense.

Heard has also filed a counterclaim for defamation against Depp because of statements Depp’s lawyer made about her. 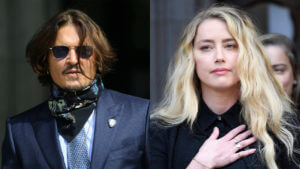 The ruling comes just weeks before a lengthy trial is scheduled to begin in Fairfax. Both Depp and Heard are scheduled to appear in court and testify, and numerous other Hollywood figures are listed as potential witnesses, either to appear in person or by video link.

Depp was allowed to sue in Virginia because the Post’s online editions are published through servers located in Fairfax County. Heard’s lawyers had sought to have the case moved to California, where the actors reside.

During Thursday’s arguments, Depp’s lawyer said that one of the reasons they brought the case in Virginia is because the state’s anti-SLAPP law is not as broad as the one in California.

Depp filed a similar lawsuit in England against a newspaper there and lost. The judge there found that Depp assaulted Heard on a dozen occasions and put her in fear for her life on multiple occasions.

The Virginia lawsuit seeks $50 million in damages. While the December 2018 Post article never mentions Depp, Heard refers to herself as a “public figure representing domestic abuse.”

Depp has said the accusations are untrue and have made it difficult for him to get the sorts of roles he once did.