IOWA CITY, Iowa (AP) — Video evidence, DNA analysis and a partial confession will be critical to proving a farm laborer stabbed a University of Iowa student to death while she was out for a run in 2018, a prosecutor told jurors Wednesday.

Poweshiek County Attorney Bart Klaver said in his opening statement that he will ask them to find Cristhian Bahena Rivera guilty of first-degree murder in the death of 20-year-old Mollie Tibbetts. If convicted, he faces life in prison without parole.

Klaver said a homeowner’s surveillance video will show Bahena Rivera’s black Chevy Malibu appearing to circle Tibbets as she ran on July 18, 2018, in her hometown of Brooklyn, Iowa. Bahena Rivera, now 26, later told police that he drove past her and turned around to get a second look because he thought she was “hot,” Klaver said.

Bahena Rivera also admitted that he got out of his car and ran to catch up with her, and became angry and fought with her after she threatened to call police, Klaver said. Bahena Rivera said the next thing he remembered was driving his Malibu with her bloody body in the trunk, which he then carried over his shoulder and hid underneath stalks in a cornfield, the prosecutor said.

Klaver said blood found on the trunk and trunk liner matched Tibbetts’ DNA, which was recovered from the body. He said an autopsy found that she had been stabbed from seven to 12 times in the chest, ribs, neck, and skull, and that she died from sharp force injuries.

They said Tibbetts was housesitting and watching Blake Jack’s dogs at the brothers’ home in Brooklyn when she went missing.

The brothers said they were out of town working different construction jobs at the time. They said they became concerned after learning on July 19 that Mollie had not shown up for work at a daycare, and she was not answering her phone. 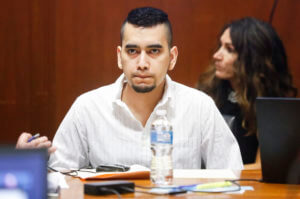 Cristhian Bahena Rivera in the courtroom at the Scott County Courthouse in Davenport, Iowa, on Wednesday, May 19, 2021. Rivera is charged with first-degree in the death of Mollie Tibbetts. (Jim Slosiarek/The Gazette)

Dalton Jack, 23 and now a sergeant in the Army at Fort Bragg in North Carolina, said he had been dating Tibbetts for three years after meeting her in high school. He described her as someone who was “happy, bubbly, goofy” and liked to have fun. Tibbetts would run most days, he said.

Bahena Rivera’s defense signaled that they may try to cast suspicion on Dalton Jack in Tibbetts’ slaying, with defense lawyer Jennifer Frese claiming he had anger problems and had once cheated on Tibbetts. Frese noted that the brothers liked to hunt and had guns and knives in their home.

Blake Jack said he wasn’t aware that his brother had any problems with anger or in his relationship.

Dalton Jack testified he was part of a crew building a bridge in Dubuque, Iowa, on the day Tibbetts disappeared. He worked 12 hours then drank beer and played yard games with the crew, before going to sleep at a hotel, he testified.

He recalled sending her a text before going to work the next morning that read, “good morning, beautiful.”

The trial is expected to last two weeks at the Scott County Courthouse in Davenport. The case is being livestreamed on Court TV and other media outlets.