BROOKLYN, New York (Court TV) — Testimony continues in the sex trafficking and bribery trial of R&B star R. Kelly in a federal courthouse in New York. This is the first of four federal and state trials in 3 different states with charges spanning over three decades.

In the prosecution’s opening statements, Assistant United States Attorney Maria Cruz Melendez argued the defendant relied on his inner circle to run his sex trafficking ring, repeatedly committing sex crimes across the country over decades.  She detailed alleged victims’ encounters with the defendant, one after another, highlighting how he allegedly lured victims while using violence and threats to control them.  She described the alleged rules Kelly imposed on his victims, including requirements to call him “Daddy,” wear baggy clothes, not look at other men, refrain from making phone calls without permission, and not leave designated rooms in his house. 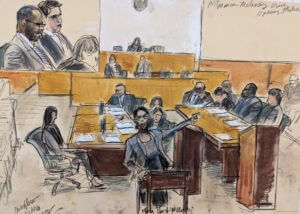 Also in opening statements, the prosecution also detailed Kelly’s relationship with Aaliyah, explaining how she met the defendant as a 12-year-old aspiring singer. Melendez told jurors Kelly engaged in sexual activity with Aaliyah for years. When he learned she might be pregnant, he decided to marry her. She was 15-years-old at this time, so Kelly and his associates allegedly bribed someone to get her a fake ID representing her as 18 to get a marriage license.

In the defense opening statements, Nicole Blank Becker argued that all of Kelly’s relationships were consensual, including long-term “beautiful” relationships.  She went on to say that, unlike the jury, witnesses have heard, seen and been involved with media. She added that they are “Monday morning quarterbacking” using “buzzwords” to grab attention.  She also argued the alleged victims were fans who actually sought out Kelly, traveling alone freely to meet him, with full access to their phones and other communications.  She says some enjoyed the notoriety of being with Kelly, some enjoyed lavish shopping sprees, while others got cash from him and wrote books about their relations with him.  She says when things did not turn out as they hoped, the accusers turned on him, maligning.

On Wednesday afternoon, the state called their first witness, Jerhonda Pace. She was a fan who testified she became sexually involved with the defendant when she was 16 years old. She described how she got to know him by attending his 2008 Chicago court case when she was 14 years old.  She described in graphic detail the sexual acts Kelly allegedly coerced her to perform, groom and “training” her even with a threesome after taking her virginity and giving her herpes. She also recalled two instances when Kelly slapped her in the face. She recalled instructions the defendant allegedly gave her while at his house, including to wear baggy clothes, to remain in her room unless she gets permission, not to use the phone, to call him “Daddy” and more. She also told jurors that Kelly made her sign a nondisclosure agreement, and that he had her write two letters. The first said: she stole $100,000 in jewelry from him, stole cash from him, worked for him, and that her sister put her up to claiming she got herpes from him. The second letter states Kelly fired her, even though she says she never worked for him. Pace later came forward in the docuseries “Surviving R. Kelly.”

Joy Nakrin and Julia Jenae of Court TV contributed to this report.