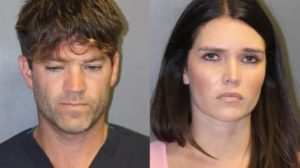 SANTA ANA, Calif. (AP) — Prosecutors are dropping charges that a doctor who appeared on a reality TV show and his girlfriend raped and drugged women in California after finding key video evidence never actually existed, an official said Tuesday.

Orthopedic surgeon Grant Robicheaux of Newport Beach — who previously appeared on a Bravo TV show called “Online Dating Rituals of the American Male” — and his girlfriend Cerissa Riley were charged in 2018 with rape by use of drugs, kidnapping and other crimes. At the time, authorities alleged that the pair plied their victims with drugs and sexually assaulted them when they were incapable of resisting.

But the high-profile case that grabbed international headlines has been mired in controversy and steeped in a contentious political battle between Orange County District Attorney Todd Spitzer, who took office about a year ago, and his predecessor Tony Rackauckas. During his election campaign, Spitzer accused Rackauckas of improperly handling the case and using it to draw publicity.

On Tuesday, Spitzer said that after having attorneys in his office review extensive evidence including audio and video recordings, text messages and documents, he decided to ask the court to dismiss the case.

“There’s insufficient evidence to prove this case beyond a reasonable doubt,” he told a news conference. 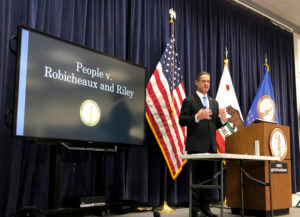 Orange County District Attorney Todd Spitzer discusses the case against a California orthopedic surgeon who appeared in a reality TV dating show, at a news conference in Santa Ana, Calif., Tuesday, Feb. 4, 2020. Prosecutors say they will seek dismissal of rape, kidnapping and other charges because there’s insufficient evidence to prove the case beyond a reasonable doubt. (AP Photo/Amy Taxin)

The case dates back to police investigations in 2016 into two incidents that weren’t referred for prosecution. The following year, prosecutors were notified there was a DNA match for evidence taken from one of the alleged victims — but it wasn’t to the defendants, Spitzer said.

Authorities searched Robicheaux’s home in January 2018 and found drugs, guns and photos and videos. In September 2018, Rackauckas held a news conference to announce the case and told reporters investigators were sifting through thousands of videos and images found on Robicheaux’s phone, some that showed women who were barely responsive.

“There is not a single piece of evidence or video or photo that shows an unconscious or incapacitated woman being sexually assaulted. Not one,” Spitzer said.

Spitzer said Rackauckas acknowledged during a civil deposition last year that he had hoped the case of the good-looking doctor and his girlfriend would bring him publicity during his re-election campaign.

A message was sent to Rackauckas Tuesday seeking comment.

Fearing a potential conflict of interest following his criticism of his predecessor, Spitzer last year asked the California Attorney General’s Office to take over the prosecution of the case. But the state determined there was no issue and the county should proceed.

Spitzer said last week the attorneys he asked to review the case told him they didn’t feel the allegations of any of the seven alleged victims could be proven in court, prompting him to decide to seek the dismissal.

Spitzer said he has referred Rackauckas’ handling of the case to the State Bar for review and has opened an internal personnel investigation. He apologized to the defendants, the Newport Beach Police Department, the public and the alleged victims, and said he would meet with them to discuss his decision.

Philip Kent Cohen, Robicheaux’s attorney, said the decision was thrilling. Cohen said he hopes his client who was a renowned hand surgeon with a successful medical practice will be able to rebuild a life for himself.

“The mere filing of this case has destroyed irreparably two lives,” he said.

Attorney Michael Fell, who represents one of the alleged victims, said she will be devastated after working with authorities to get the charges filed.

“My client believes with all of her heart she was sexually assaulted,” he said. “That doesn’t change what she went through.”

Both the district attorney’s office and the Orange County Sheriff’s Department have been hit with stinging accusations of impropriety.

The agencies currently are reviewing more than 22,000 criminal cases amid allegations that more than a dozen deputies mishandled evidence, the Sheriff’s Department announced Tuesday.

The review of evidence, which began late last yer, involves cases from March 2015 to March 2018. It follows allegations that some evidence was booked after convictions, or not at all. That could affect convictions.

“In every one of these cases, a person accused of a crime is owed their right to due process in the criminal justice system,” Sheriff Don Barnes said in a statement. “In some cases, there is also a victim who wants to see justice served.”

The Sheriff’s Department said that five deputies have been fired, nine have received discipline, including non-paid time off, and three deputies remain under investigation.