When Andrew Mercado found himself in the middle of a protest following George Floyd’s death in Minneapolis last year, he was just figuring out how to livestream on Facebook. A few months later, though, thousands watched as he streamed footage from the Wisconsin streets where Kyle Rittenhouse shot three people.

Mercado was just one of a number of people who caught snippets of Rittenhouse on that August 2020 night of turmoil and unrest in Kenosha when the 17-year-old from nearby Antioch, Illinois, shot three men, killing two of them. 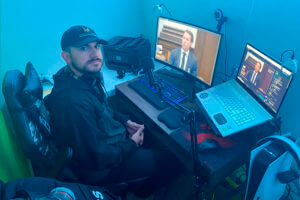 Andrew Mercado of Mercado Media monitors his streams of the Kyle Rittenhouse trial from his home setup in White Bear Lake, Minn., on Thursday Nov. 4, 2021. Mercado has been streaming the trial on YouTube and Facebook for eight hours a day since the proceedings began. (Mohamed Ibrahim/Report for America via AP)

Livestreamers such as Mercado have become ubiquitous at protests, seeking to provide an unedited view into movements that often reflect an angry and divided America. They are often near the heart of protests, adorned with “press” identification and protective equipment, holding glowing phones that offer a real-time view into some of the most dramatic and violent clashes.

Some say they are journalists who follow the same principles of objectivity as traditional news outlets. Others are activists seeking to amplify the impact of the protests. But nearly all say they are providing an alternative to mainstream newsrooms that they don’t always trust.

Livestreaming “fits into a larger cultural moment that we’re in, where people seem to want authenticity,” said Seth Lewis, a journalism professor at the University of Oregon. “It seems raw and real.”

Mercado, who lives in a Minneapolis suburb, said that when he started documenting protests last year, he was a “devout Republican.” But amid mass protests over the killing of Floyd by a Minneapolis police officer, he wanted to examine the issue of police accountability for himself.

“Now I’m getting my own perspective on things,” he said, adding that he does not support either major political party.

A friend had to show Mercado how to livestream from his Facebook account on his phone before he started documenting the protests. Soon, his video stream had more than 60,000 viewers.

As people sent him money through money transfer apps, he bought gear such as a protective vest and gas mask. He also set up accounts on YouTube and Facebook that paid him for his streams.

Less than three months after first pointing his phone at the Minneapolis protests, Mercado was traveling the country and trying to make a living out of covering protests. He was on his way to a protest in Washington when he heard that a white Kenosha police officer had shot Jacob Blake, a Black man. He immediately headed that way.

As some of the protests in the Wisconsin city turned violent, Mercado said he found it hard to stay in his preferred role of observer. At one point, a fire threatening a church compelled him to put down his phone and extinguish the flames. 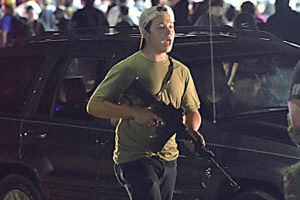 As shots rang out from Rittenhouse’s rifle that night, Mercado was on the street. He streamed video as Rittenhouse ran past between the first and second shootings.

“I jumped out of the objective observer mode and I grabbed people and tried to help them,” Mercado said.

Mercado was not the only one to capture footage of Rittenhouse. Video streams have featured prominently at the trial so far, with several livestreamers and reporters taking the witness stand.

Kristan Harris, who hosts a web-based talk show “The Rundown Live,” testified Monday after video footage he shot that night was shown earlier in the trial.

He told The Associated Press that he saw a livestream as “the most raw form of reporting” that would “allow people to make decisions for themselves.”

But even with plentiful video footage from the scene of the shooting, Rittenhouse’s case has been cast into a cultural wedge that has been used by powerful interest groups, extremists, politicians and others to push their own agendas.

“They are capturing snippets and slices of larger things occurring,” said Lewis, the journalism professor. “They still don’t provide all the pieces of the puzzle.”

However, Lewis pointed out that smartphones — and their ability to instantly capture video — have completely changed how instances of police brutality are documented, particularly for Black people.

“People would not believe us so we had to document it,” said KingDemetrius Pendleton, a Minneapolis-based activist and citizen journalist who can frequently be found at protests with a regular camera in one hand and a phone in the other.

For Pendleton, the livestream doesn’t just broadcast images to an audience, it also transports his audience to the scene of the protest. That’s especially important to him because he says Black people from his community are not always able to take to the streets due to financial hardships or legal troubles.

“When I’m livestreaming, there are so many that can’t go out,” he said. “I’m showing them.”
___
Associated Press writer Gillian Flaccus in Portland, Oregon, contributed to this report.