MADISON, Wis. (AP) — Kyle Rittenhouse shot three men, killing two of them and wounding the third, during a protest against police brutality in Kenosha, Wisconsin, last year. Rittenhouse has argued that he fired in self-defense after the men attacked him. Here’s a look at the charges that prosecutors carried into court, as well as lesser charges that the judge could put before the jury in final instructions. Rittenhouse affirmed in court that he agreed with his attorneys where they did not oppose adding charges.

COUNT 1: FIRST-DEGREE RECKLESS HOMICIDE, USE OF A DANGEROUS WEAPON 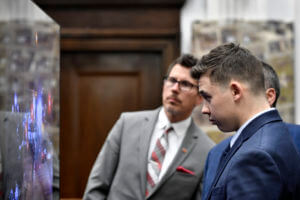 Kyle Rittenhouse, front, his attorney, Mark Richards, middle, and Assistant District Attorney Thomas Binger watch an aerial video of the moments where he shot Jospeh Rosenbaum on Aug. 25, 2020, during his trail at the Kenosha County Courthouse in Kenosha, Wis., on Wednesday, Nov. 10, 2021. (Sean Krajacic/The Kenosha News via AP, Pool)

Former Waukesha County District Attorney Paul Bucher said prosecutors’ decision to charge reckless instead of intentional homicide shows they don’t know what happened between Rittenhouse and Rosenbaum and what might have been going through Rittenhouse’s mind when he pulled the trigger.

The charge is punishable by up to 60 years in prison. The dangerous weapon modifier carries an additional five years.

Prosecutors asked Judge Bruce Schroeder to let the jury also consider a lesser charge, second-degree reckless homicide, that does not require a finding that Rittenhouse acted with utter disregard for human life. It’s punishable by up to 25 years in prison. But after Rittenhouse’s attorneys objected, Schroeder said he did not plan to give that instruction. He said he expected that a guilty verdict on that count would be overturned because the defense objected to adding it.

COUNT 2: FIRST-DEGREE RECKLESSLY ENDANGERING SAFETY, USE OF A DANGEROUS WEAPON

This felony charge is connected to the Rosenbaum shooting. McGinniss told investigators he was in the line of fire when Rittenhouse shot Rosenbaum. The charge is punishable by 12 1/2 years in prison. The weapons modifier carries an additional five years.

Prosecutors asked Schroeder to let the jury consider a second-degree version of this charge. The difference is that the second-degree version doesn’t require a finding that Rittenhouse acted with utter disregard for human life. Schroeder said he was inclined to allow that instruction, though he didn’t make a final ruling. The charge is punishable by up to 10 years in prison.

COUNT 3: FIRST-DEGREE RECKLESSLY ENDANGERING SAFETY, USE OF A DANGEROUS WEAPON

Video shows an unknown man leaping at Rittenhouse and trying to kick him seconds before Anthony Huber moves his skateboard toward him. Rittenhouse appears to fire two rounds at the man but apparently misses as the man runs away.

This charge is a felony punishable by 12 1/2 years in prison. The weapons modifier again would add up to five more years.

Schroeder said he would decline prosecutors’ request that jurors be allowed to consider this charge in the second degree.

COUNT 4: FIRST-DEGREE INTENTIONAL HOMICIDE, USE OF A DANGEROUS WEAPON

This charge is connected to Huber’s death. Video shows Rittenhouse running down the street after shooting Rosenbaum when he falls to the street. Huber leaps at him and swings a skateboard at his head and neck and tries to grab Rittenhouse’s gun before Rittenhouse fires. The criminal complaint alleges Rittenhouse aimed the weapon at Huber.

Intentional homicide means just that — a person killed someone and meant to do it. Bucher said that if Rittenhouse pointed the gun at Huber and pulled the trigger that would amount to intentional homicide. However, self-defense would trump the charge.

“Why I intended to kill this individual makes the difference,” Bucher said.

The count carries a mandatory life sentence. The weapons modifier would add up to five years. 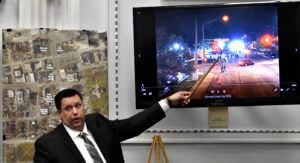 James Armstrong, of the state crime lab, points to drone video he digitally enlarged during Kyle Rittenhouse’s trial at the Kenosha County Courthouse in Kenosha, Wis., on Tuesday, Nov. 9, 2021. Rittenhouse is accused of killing two people and wounding a third during a protest over police brutality in Kenosha, last year. (Sean Krajacic/The Kenosha News via AP, Pool)

Second-degree intentional homicide is a fallback charge when a defendant believed he was in imminent danger of death or great bodily harm and that it was necessary to use force — but either belief was unreasonable. It’s punishable by up to 60 years in prison.

The first-degree reckless homicide charge sought in Huber’s death matches an original charge in Rosenbaum’s death — it would require jurors to decide that Rittenhouse caused Huber’s death with an utter disregard for human life — and is punishable by up to 60 years in prison.

COUNT 5: ATTEMPTED FIRST-DEGREE INTENTIONAL HOMICIDE, USE OF A DANGEROUS WEAPON

This is the charge for Rittenhouse shooting Gaige Grosskreutz in the arm seconds after he shot Huber, and as Grosskreutz came toward him holding a pistol. Grosskreutz survived. Video shows Rittenhouse pointing his gun at Grosskreutz and firing a single round.

The charge carries a maximum sentence of 60 years. The weapons modifier would add up to five more years.

The possible punishment for attempted second-degree intentional homicide is 30 years.

COUNT 6: POSSESSION OF A DANGEROUS WEAPON BY A PERSON UNDER 18

Rittenhouse was armed with an AR-style semi-automatic rifle. He was 17 years old on the night of the shootings. Wisconsin law prohibits minors from possessing firearms except for hunting or when supervised by an adult in target practice or instruction in the proper use of a dangerous weapon. Rittenhouse’s attorneys argued that another subsection of the law, regarding short-barreled rifles, provided grounds for dismissing the charge.

Prosecutors argued the defense was misreading the statute, and Schroeder had earlier twice declined to dismiss the charge. But the judge also had said the statute was confusingly written, and appeared ready to instruct the jury that they could not convict Rittenhouse on the charge unless the state had proven that his rifle was short-barreled.

After prosecutors conceded that the rifle was not short-barreled, Schroeder dismissed the charge.

The charge is a misdemeanor punishable by up to nine months behind bars.

COUNT 7: FAILURE TO COMPLY WITH AN EMERGENCY ORDER FROM STATE OR LOCAL GOVERNMENT

Rittenhouse was charged with being out on the streets after an 8 p.m. curfew imposed by the city, a minor offense that carries a fine of up to $200. Judge Bruce Schroeder dismissed the charge during the second week of trial after the defense argued that prosecutors hadn’t offered enough evidence to prove it.

This story was originally published Nov. 2, 2021, and updated Nov. 15, 2021, to reflect the latest charges the jury will deliberate.