REDWOOD CITY, Calif. (AP) — A juror in Scott Peterson’s two-decade-old murder trial will be granted immunity before testifying at a hearing that could determine whether a new trial is granted, authorities said.

The offer to Richelle Nice will come before she testifies at a Feb. 25 evidentiary hearing, Stanislaus County District Attorney Birgit Fladager announced Monday.

Nice was Juror 7 in the trial that ended in 2004 with Peterson’s conviction for killing his pregnant wife, Laci Peterson, and their unborn son.

Prosecutors say Peterson took his wife’s body from their Modesto home on Christmas Eve 2002 and dumped her from his fishing boat into the San Francisco Bay, where her body and that of her unborn son washed ashore separately in April 2003.

Peterson’s lawyers want to overturn his murder conviction on grounds of bias and misconduct. They contend that Nice lied on a jury questionnaire when she denied having been the victim of a crime or involved in a lawsuit.

Attorneys say Nice did not reveal during jury selection that she had been beaten by a boyfriend while pregnant in 2001. She also didn’t disclose that during another pregnancy she had obtained a restraining order – considered a type of lawsuit — against a boyfriend’s ex-girlfriend, whom she feared would hurt her unborn child.

“I don’t think you can make a cogent argument that somebody who is pregnant and has been the victim of violence can go into a trial and at the very least not feel some bias towards a circumstance where a victim is a pregnant woman who basically had violence occur,” Peterson’s lawyer, Pat Harris, said Monday after the hearing.

Peterson’s attorneys have argued that she actively sought to join the jury because she wanted Peterson to be punished for the deaths.

She has denied it. 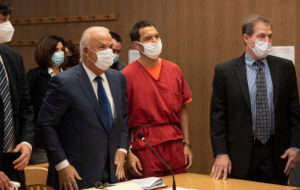 Scott Peterson and his council stand as the Judge Anne-Christine Massullo enters the room during a resentencing hearing at the San Mateo County Superior Court in Redwood City, Calif., Dec. 8, 2021. Peterson appeared in San Mateo Superior Court for the first time since he was sentenced to death there more than 17 years ago for the murders of his wife Laci and their unborn son Conner. (POOL-Andy Alfaro,The Modesto Bee)

Nice had said that without immunity — which could protect her from a perjury charge — she would invoke the Fifth Amendment against self-incrimination. However, if she refuses to answer questions on the witness stand after being given immunity, Nice could be held in contempt of court.

Nice later wrote dozens of prison letters to Peterson while he was on death row. She also co-authored a book on the case with other jurors.

The evidentiary hearing will run about a week, following which the judge will then decide within 90 days whether to grant Peterson a new trial.

Peterson, 49, was sentenced to death in 2005 but he was resentenced to life without parole in December. The California Supreme Court tossed out his original sentence in 2020 on grounds that the jury was improperly screened for bias against the death penalty.

However, the justices also said in their decision that there was considerable circumstantial evidence incriminating Peterson in the first-degree murder of Laci and the second-degree murder of their unborn son.