GREEN BAY (WGBA) — Taylor Schabusiness, a woman accused of killing and dismembering a Green Bay man, will receive a second exam to determine if she’s competent to stand trial. 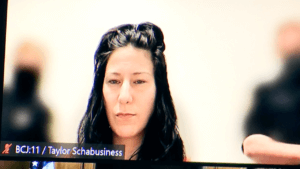 Still frame of video showing Taylor Schabusiness appearing in court via Zoom for a hearing. April 13, 2022. (via WGBA)

This comes after a hearing Wednesday in Brown County court, where Judge Thomas Walsh said the court-ordered competency evaluation indicates she’s competent to proceed with a trial.

Judge Walsh then granted Shabusiness’ lawyer’s request for an independent competency exam. The exam is expected to be completed in time for Shabusiness’ next scheduled court appearance, a status conference at 3 p.m. on May 10.

Schabusiness has been charged with first-degree intentional homicide, mutilating a corpse, and third-degree sexual assault in connection to the death of a Green Bay man back in February.

This story was originally published April 14 by WGBA in Green Bay, an E.W. Scripps Company.