CHARLOTTESVILLE, Va. (AP) — Virginia football coach Tony Elliott smiled broadly when asked to share thoughts about three of his players slain in a campus shooting, as if doing so would offer some respite from two days of intense heartache.

Lavel Davis Jr., D’Sean Perry and Devin Chandler were funny, competitive and great teammates, Elliott said, with personality quirks all their own that stood out.

Davis was gentle, but passionate, with a smile that lit up a room, Elliott said. The 6-foot-7 wide receiver set the standard when it came to practicing and preparing for a game — even when the coaches weren’t around.

“The other thing that resonated is just how good of a teammate he was and how much he loved his teammates and would do anything for his teammates,” Elliott told reporters at a Tuesday news conference.

Perry was probably the most interesting guy on the roster, the coach said, a dedicated player but also a studio art major who shaped pots out of clay, liked to draw and listen to classical music.

“And he had a sense of humor that was one of a kind that only D’Sean could have,” Elliott said. “You knew immediately when somebody said something, yeah, that was D’Sean.”

Chandler transferred in from Wisconsin and had yet to play at Virginia.

“He just was a big kid. Smiled all the time. Loved to dance. Loved to sing. Loved to compete, even though the guys revealed that he wasn’t very good at video games, but he thought he was,” Elliott said, laughing. “But he loved to compete.”

The three young men were returning from a class trip Sunday night when authorities say they were killed by a fellow student and former football player. Two other students were wounded, including another football player, Mike Hollins, who underwent a second surgery Tuesday.

Davis was from Dorchester, South Carolina. His major was undecided in the College of Arts and Sciences. Davis finished the 2020 season ranked No. 2 in the nation and No. 1 in the Atlantic Coast Conference for average yards per reception. 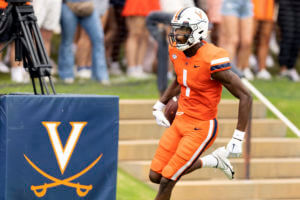 FILE – Virginia’s Lavel Davis Jr. (1) celebrates after scoring a touchdown during an NCAA college football game against Richmond in Charlottesville, Va. on Sept. 3, 2022. Davis was one of three Virginia football players killed in a shooting, Sunday, Nov. 13, 2022, in Charlottesville, Va., while returning from a class trip to see a play. (Mike Kropf/The Daily Progress via AP, File)

An injury sidelined Davis for the 2021 season but he returned this year, starting six of the first seven games. In the season opener against the University of Richmond, he caught four passes for 89 yards, including a 56-yard touchdown. He was on a watch list for 2022 Comeback Player of the Year.

Herman Moore, who developed a friendship with Davis as an alumni-mentor, said Davis was hoping to finish his college career on a high note after bouncing back from his injury.

Davis had aspirations for the NFL, Moore said. But he was also thinking about life beyond sports, perhaps in business. The future, however, was yet to be decided.

“He wanted to be recognized as the best receiver in the nation,” Moore said. “And he felt he had all the tools and the athleticism to get it done.”

Overall, Moore said Davis was “an outstanding, charismatic young man. He was very ambitious — confident both as an athlete but also as a student. He just had his head on right.”

“He made a point to come up and shake my hand and told me I should call him Vel,” Hamilton tweeted.

“One thing that struck me about Vel was how much his classmates liked him and vice versa,” Hamilton wrote. “In my experience, star athletes often tend to hang out with other athletes (understandable, given the time commitment). But Vel seemed to go out of his way to make friends with non-athletes.”

Chandler was a wide receiver from Huntersville, North Carolina. He recently transferred from Wisconsin, where his accomplishments included a 59-yard kickoff return and 18-yard rush in the Duke’s Mayo Bowl against Wake Forest in 2020. 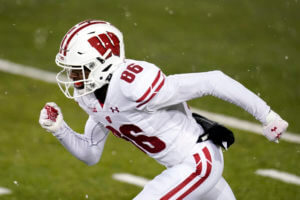 FILE – Wisconsin wide receiver Devin Chandler runs up field during an NCAA college football game against Iowa, on Dec. 12, 2020, in Iowa City, Iowa. Chandler, who transferred to the University of Virginia, was one of three Virginia football players killed in a shooting, Sunday, Nov. 13, 2022, in Charlottesville, Va., while returning from a class trip to see a play. (AP Photo/Charlie Neibergall, File)

Hamilton wrote on Twitter that Chandler was in one of his large lecture classes.

“He nevertheless made a point to come to my office hours repeatedly, often just to ask questions about how things worked around UVA,” Hamilton wrote.

The professor later helped Chandler to declare his major in American studies, “which he was really excited about.”

“He was an unbelievably nice person, always a huge smile, really gregarious and funny,” Hamilton wrote. “One of those people who’s just impossible not to like.”

Ethan Johnson, who knew Chandler since high school, said he “was a fun guy to be around. He was always dancing. Always dancing.”

Johnson is two years younger than Chandler. But they spent a season together on the high school football team, with Johnson covering Chandler as a cornerback every day during practice. This past summer, the young men worked out together at their former high school.

“And he was there telling me how much of a difference he saw in me. How much I had grown. How I had improved as a player,” said Johnson, who is now a freshman cornerback at Appalachian State. “That was the type of guy he was. He was always trying to lift people up.”

Jim Leonhard, the University of Wisconsin’s interim head football coach, tweeted Monday that Chandler’s personality “was infectious and he was a joy to be around.”

Perry was a linebacker from Miami majoring in studio art. In September, Perry recalled how linebackers coach Clint Sintim asked him to move to defensive end, according to the Daily Progress. 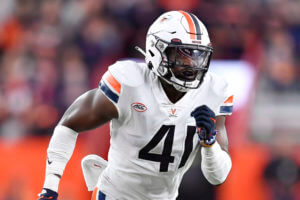 FILE – Virginia linebacker D’Sean Perry runs on the field during the second half of an NCAA college football game against Syracuse on Sept. 23, 2022 in Syracuse, N.Y. Perry was one of three Virginia football players killed in a shooting, Sunday, Nov. 13, 2022, in Charlottesville, Va., while returning from a class trip to see a play. (AP Photo/Adrian Kraus, File)

Perry told the newspaper it was “no problem at all. It was a smooth transition.”

“Honestly, I feel like I can do both (linebacker and defensive end),” Perry said. “And I prepared myself well to work in space and pass rush during the offseason. … So, both positions I’m very comfortable with and I’m just trying to help the team win.”

Perry appeared in seven games this year and made seven tackles.

Zoe Tran, a friend of Perry’s and fellow student at Virginia, told WUSA9 he “was much more than a football player.”

She said the two met during her first year and quickly became friends.

“He was an amazing studio artist. He loved anime, loved to cook and was one of the most loyal people” Tran told the station.

He was also quiet but extremely sweet, she said. He was gentle and playful as well as religious.

“I wish that more people knew more about him,” Tran said. “He was very reserved, but I think it was because he saved all of his love for those who were close to him.”

Michael Haggard, an attorney for Perry’s parents, issued a statement thanking the South Florida and the Charlottesville communities for “the outpouring of support during this impossibly tragic time.”

Mike Hollins, a running back on the football team who was also shot, had a second surgery Tuesday.

“Mike is a fighter — and he’s showing it,” Hollins’ mother, Brenda Hollins, told The Associated Press on Monday after flying to Virginia from Louisiana. “We have great doctors who have been working with him. And most importantly, we have God’s grace and God’s hands on him.” 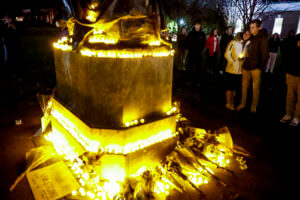 Jenna Hughes, of Hanover, Va., stands with Brian Stanmeyer, of Vienna, Va., as they gather for a candlelight vigil after a shooting that left three students dead the night before at the University of Virginia, Monday, Nov. 14, 2022, in Charlottesville, Va. (Shaban Athuman/Richmond Times-Dispatch via AP)

Like most college football players, Hollins has aspirations to play professionally, his mother said. But he has other dreams and goals, which include being an educator.

“We’re praying for the other families,” she said.

“He has a big personality, and I think he’s a young man that is fully invested in this institution, this program,” coach Elliott said Tuesday. “He is a guy that I’ve seen really start to kind of come into his own from a leadership standpoint.” 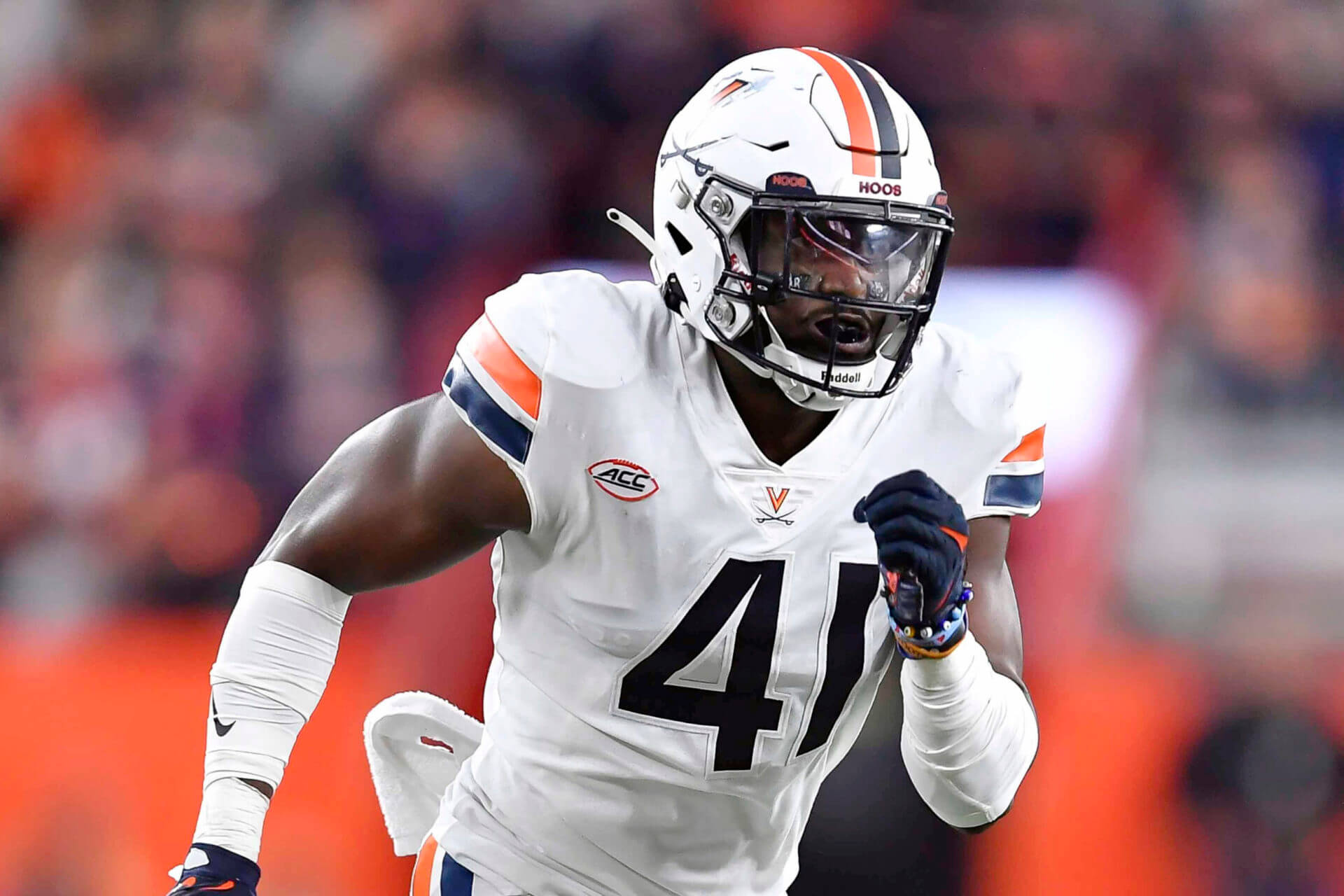 FILE - Virginia linebacker D'Sean Perry runs on the field during the second half of an NCAA college football game against Syracuse on Sept. 23, 2022 in Syracuse, N.Y. Perry was one of three Virginia football players killed in a shooting, Sunday, Nov. 13, 2022, in Charlottesville, Va., while returning from a class trip to see a play. (AP Photo/Adrian Kraus, File)
MORE NEWS