“My son was a loving, caring young man,” Happy Perry, the mother of D’Sean Perry, told reporters at a news conference in their home state of Florida. “He loved his family. He loved his teammates. And this is heartbreaking right now. I would like to advocate on his behalf for mental health and our gun violence laws.” 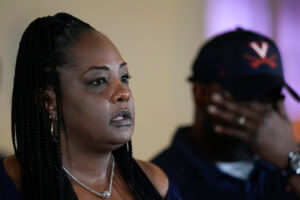 Sean Perry, right, reacts as Happy Perry talks about their son, D’Sean Perry, a University of Virginia football player who was killed last month when a shooter opened fire on a bus carrying students returning from seeing a play, at a press conference, Thursday, Dec. 15, 2022, in Coral Gables, Fla. Perry’s football teammates Lavel Davis Jr. and Devin Chandler were also killed in the Nov. 13, 2022 shooting, while a fourth member of the team and another student were wounded. (AP Photo/Rebecca Blackwell)

She added: “I’m asking that the football world takes a stand and join us in this fight.”

Perry and teammates Lavel Davis Jr. and Devin Chandler were killed Nov. 13 on a charter bus that was carrying students back to Charlottesville from a field trip. Christopher Darnell Jones Jr., 23, a fellow student and former football player, opened fire as the bus returned to campus, police said. Two other students were wounded.

Jones was arrested the next day following a manhunt and is in jail facing second-degree murder charges. Authorities have not released a possible motive. Jones’ father, Christopher Jones Sr., told news outlets that his son seemed paranoid and talked about people picking on him.

Marlon Dance, owner of Dance’s Sporting Goods, told The Associated Press that Jones attempted to buy a handgun in 2018 but was denied because he was under the age of 21.

Jones was denied again in 2021 because he failed a background check, for which Dance did not provide further details. Dance said both attempted purchases were forwarded to the Virginia State Police.

Earlier this year, Dance said that Jones purchased a pistol and a rifle from the store, stating that there was “nothing noteworthy about these purchases.”

Haggard, the attorney, said in a statement following the news conference, that Jones’ attempts to illegally buy firearms should have raised concerns. 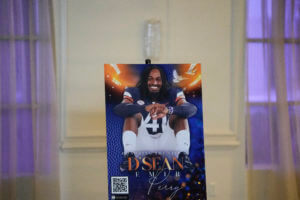 An image of D’Sean Perry, a University of Virginia football player who was killed last month when a shooter opened fire on a bus carrying students returning from seeing a play, is displayed at a press conference with his parents, Thursday, Dec. 15, 2022, in Coral Gables, Fla. Perry’s football teammates Lavel Davis Jr. and Devin Chandler were also killed in the Nov. 13, 2022, shooting, while a fourth member of the team and another student were wounded. (AP Photo/Rebecca Blackwell)

“The law should be that once there are two red flags (trying twice to buy the gun), there should be a further inquiry into the purchase,” Haggard said.

Perry’s mother said at the news conference: “The red flags were there. And this young man was still able to purchase a firearm. And that in itself is a red flag for our nation.”

A handgun was found at the scene of the shooting, while a rifle and handgun were recovered from Jones’ residence in Charlottesville, Virginia State Police said in a statement last month.

The statement did not elaborate on where those weapons came from or whether they were legally obtained. But they were turned over as evidence to the U.S. Bureau of Alcohol, Tobacco, Firearms and Explosives for processing, state police said.

Haggard also pointed out at the news conference that Jones had drawn the attention of the university’s threat-assessment team this fall in the context of a “potential hazing issue.”

During that review, university officials heard from a student that Jones commented about having a gun, though that student did not report Jones making any threat, the university said in a statement last month.

University officials investigated and ended up discovering Jones had previously been tried and convicted of a misdemeanor concealed weapons violation in 2021, which he had failed to report, according to the statement.

Last week, two lawyers and a former U.S. attorney were chosen by Virginia’s Attorney General to conduct an external review of the shooting.

When asked recently about his willingness to consider gun control measures, Youngkin said he first wanted to see the results of the criminal investigations into the UVA shooting and another shooting last month at a Chesapeake Walmart.

As Perry’s parents called for change, they also remembered their son, a young man whose life was taken too young at the age of 22 and who was as passionate about football as he was about the arts.

“If you didn’t know D’Sean … you wouldn’t even know that he was a football player,” his father Sean Perry said. “Because once he gets off (the field), he’s just a regular old kid. He would talk about politics. He would talk about religion. He would about talk anything other than football. So we’re very, very proud of who he became.”

Perry was also a prankster, waiting in the garage for an hour with a Halloween mask to pull of a joke, his mother said.

He had another role in the family as well: He was the tree topper for the Christmas tree because he stood well above 6 feet tall.

“We would wait until he comes home, because he was playing football, to put the tree topper on,” Happy Perry said, reflecting on his absence this year. “That was a moment for me. Because I couldn’t grasp that.” 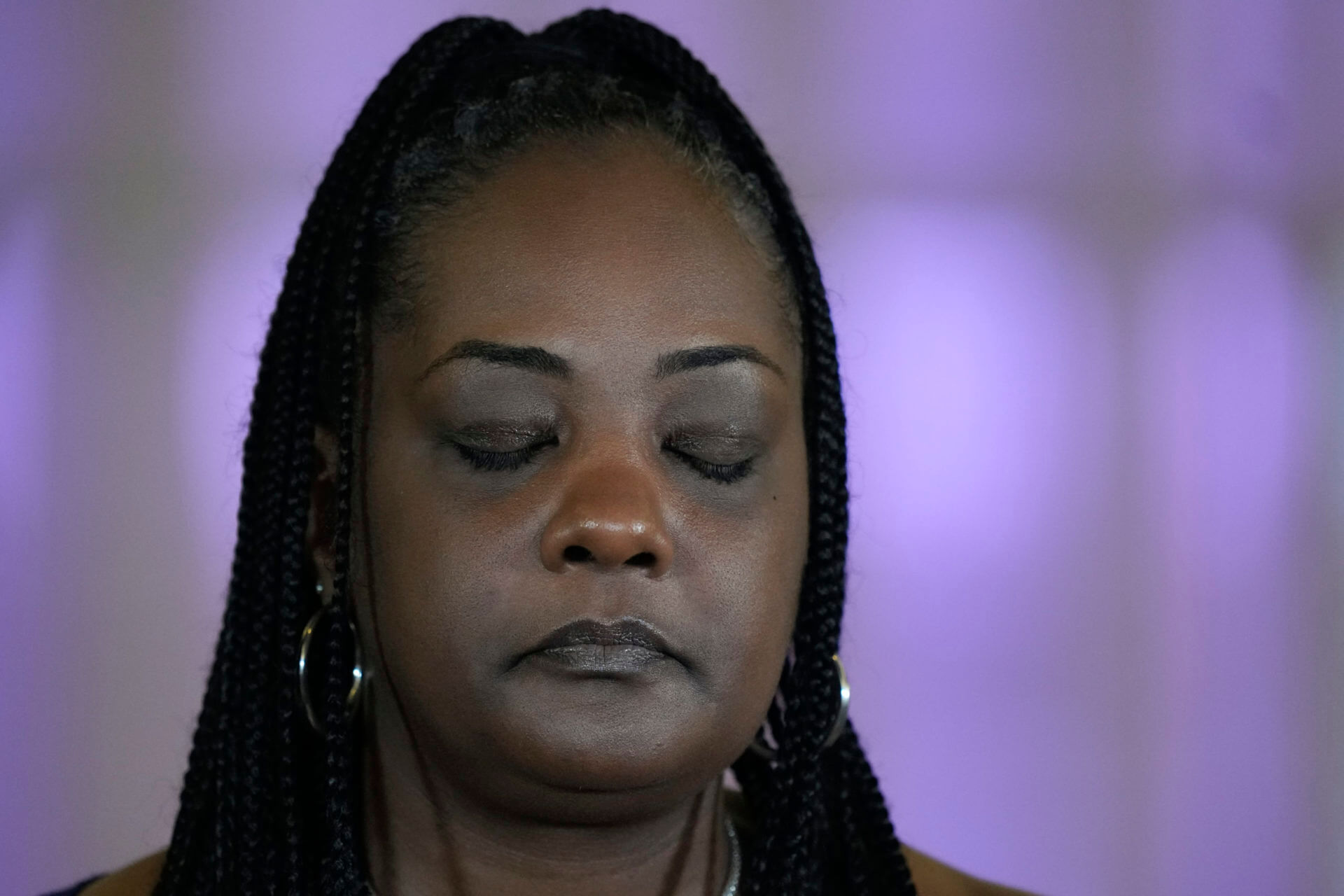 Happy Perry, mother of D'Sean Perry, a University of Virginia football player who was killed last month when a shooter opened fire on a bus carrying students returning from seeing a play, closes her eyes briefly as she talks about her son at a press conference, Thursday, Dec. 15, 2022, in Coral Gables, Fla. Perry's football teammates Lavel Davis Jr. and Devin Chandler were also killed in the Nov. 13, 2022, shooting, while a fourth member of the team and another student were wounded. (AP Photo/Rebecca Blackwell)
MORE NEWS