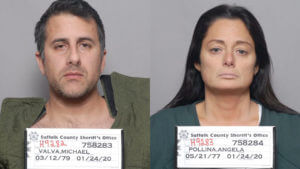 CENTRAL ISLIP, N.Y. (AP) — Prosecutors said Monday that a special grand jury on Long Island will investigate the case of an 8-year-old boy who died of hypothermia while in the custody of his father, a New York Police Department officer.

Prosecutors have said the boy died Jan. 17 after he was forced to sleep in an unheated garage as temperatures dropped to under 20 degrees Fahrenheit (minus 6 Celsius).

Michael Valva and his fiancée, Angela Pollina have been charged with second-degree murder in Thomas’ death. They deny wrongdoing.

Prosecutors have said audio files recovered from the couple’s Center Moriches home recorded them discussing the fact that Thomas was suffering from hypothermia, had been washed with cold water, couldn’t walk and was “face-planting” on the concrete.