A former New York City police officer who allegedly forced his young son to sleep in an unheated garage in the bitter cold is fighting to keep home camera footage out of trial.

Michael Valva and his fiancée, Angela Pollina, are charged with second-degree murder in the January 2020 death of eight-year-old Thomas Valva. Thomas froze to death in that 19-degree Long Island garage. 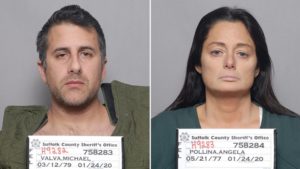 Valva and Pollina are also charged with four counts of endangering the welfare of a child. That includes two counts for Thomas and two for his brother, Anthony, who also was forced to sleep in the garage. Both defendants have pleaded not guilty.

Prosecutors say the home’s Ring and Nest camera footage is key video evidence Thomas and his brothers were abused.

Defense attorneys, however, contend that the footage was accessed without permission and without a warrant. They argued that police asked Pollina for access to the in-home cameras when she was in a vulnerable state — she was being treated at the hospital with Xanax at the time.

Prosecutors maintain the recordings were legally obtained by Suffolk County, New York police, and filed documents arguing they be made admissible.

A judge has yet to rule whether video evidence can be used as evidence.

During five days of pretrial hearings in May, a housekeeper that worked for the family recalled the day Thomas died. Tyrene Rodriquez testified that the little boy was naked, cold and blue in color as his father administered CPR just before the child succumbed to hypothermia.

Valva, 42, and Pollina, 43, have both pleaded not guilty to murder and child endangerment charges. The couple is scheduled to return to court on August 5, when oral arguments will take place regarding whether Valva and Pollina will have separate trials.