BRADLEY, Ill. (AP) — A judge on Wednesday denied bail to the second of two people charged with killing one police officer and wounding another at a northern Illinois hotel last week. 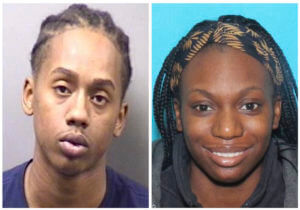 This combo of images released by the Illinois State Police, shows Darius D. Sullivan, left, and Xandria A. Harris, two people authorities were searching for Thursday, Dec. 30 2021, who are believed to have been involved in the fatal shooting of one police officer and wounding of another at a northern Illinois hotel. (Illinois State Police via AP)

Judge Kathy Bradshaw-Elliott denied Sullivan bail on Wednesday, two days after she denied it to Harris.

Authorities arrested Sullivan, who is also charged with aggravated battery, in Indiana on New Year’s Eve. Harris surrendered to police hours later in Bradley, a village of about 16,000 people roughly 50 miles (80 kilometers) south of Chicago. The (Kankakee) Daily Journal reported that at least three other people were arrested in connection with the case, including a man who was with Sullivan when he was arrested and two people, including Sullivan’s mother, who are accused of impeding the search for Sullivan and Harris.

“Anyone who assisted Darius Sullivan, regardless of the state, they have to be held to the fullest account, (and) they should feel the full force and weight of the law,” Kankakee State’s Attorney Jim Rowe said at a news conference Wednesday.

According to prosecutors, the officers were investigating a complaint about dogs that were barking in a car parked outside of a Comfort Inn when Sullivan shot Bailey in the head after he and Rittmanic knocked on the door of the room where Sullivan and Harris were staying.

Sullivan then allegedly shot at Rittmanic, chased her down a hallway and disarmed her with Harris’ help before he shot the officer twice with her own gun as she pleaded for her life.

Illinois doesn’t have the death penalty, and Rowe said again Wednesday that he has asked the U.S. attorney general’s office to consider bringing murder charges against Sullivan and Harris and making it a federal death penalty case.

They did so in Illinois in the 2017 abduction and killing of Yingying Zhang, a Chinese student at the University of Illinois whose body was never found. Authorities prosecuting Brendt Christensen in Zhang’s death drew on federal laws that allow the Justice Department to seek the death penalty, though Christensen was ultimately sentenced to life in prison after the jury couldn’t agree on the death sentence.

There are ways for the Justice Department to pursue a federal death penalty case in last week’s attack if it chooses to do so, said Phil Turner, a former federal prosecutor.

“It has to be a federal crime that carries the death penalty,” Turner said.

He said that within the federal criminal code there is a charge that carries a maximum sentence of the death penalty: committing murder in the course of a violent crime. Federal prosecutors could seek the death penalty if they brought such a charge or charged the suspects with kidnapping, as Christensen was.

“Kidnapping requires restraining someone against their will,” he said. “How could the defense ever argue what happened (to Rittmanic) wasn’t a kidnapping.?”