COLUMBIA, S.C. (AP) — An investigator showed jurors the suspected murder weapon Thursday at the trial of a South Carolina man accused of killing a woman who mistook the man’s car for her Uber ride.

The bladed multi-tool resembling a double-handled knife was exhibited on the fourth day of trial for Nathaniel Rowland, who faces murder and kidnapping charges in the death of 21-year-old Samantha Josephson.

The University of South Carolina student from Robbinsville, New Jersey, disappeared from Columbia’s Five Points entertainment district one night in March 2019. Her body was later found in remote woods some 65 miles (105 kilometers) from Columbia.

Her body had more than 100 wounds to the face, neck and other parts of the body — a death that turned a national spotlight on ride-hailing safety and led to some changes, including more prominent displays of driver license plates.

Prosecutors have argued that Rowland trapped Josephson in the back seat of his black Chevrolet Impala using the backseat childproof locks. Investigators said they subsequently found the victim’s blood and cellphone in Rowland’s vehicle.

As an investigator with the State Law Enforcement Division unwrapped the multi-tool from its packaging Thursday on the witness stand, relatives of the slain woman fidgeted and reached across aisles for one another, The State newspaper reported.

Dalila Jazic, the investigator, also showed clothes with apparent blood on them, saying they were found in a trash can at the home of Rowland’s girlfriend at the time. The former girlfriend has testified she noticed blood in Rowland’s car and watched him clean the multi-tool in the hours after Josephson’s disappearance. 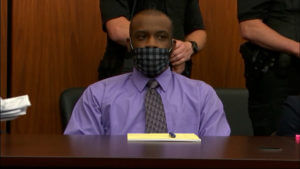 FILE – Defendant Nathaniel Rowland listens during his trial in Richland County Court, Tuesday, July 20, 2021, in Columbia, S.C. Rowland is on trial for the kidnapping and murder of 21-year-old Samantha Josephson. (Court TV)

On cross-examination by Rowland’s defense attorney, Jazic acknowledged that no scratches were found on Rowland’s arms or face when she photographed him after his arrest.

Rowland’s defense team has argued although Josephson appeared to fight back against her attacker, none of Rowland’s DNA was found on her body, and no visible marks were found on Rowland following his arrest.

Earlier Thursday, Todd Schenk, a crime scene expert with the State Law Enforcement Division, told jurors that Josephson was already dead when her body was left in the woods.