BRIDGEWATER, N.J. (AP) — A New Jersey teen involved in a mall fight says police were wrong to treat him differently than the other youth involved in the altercation, who is Black.

Video posted online last week shows an officer tackling and handcuffing the Black 14-year-old at the Bridgewater Commons Mall. A second officer pushes the 15-year-old onto a couch but doesn’t restrain him.

The incident has prompted an internal affairs investigation and calls for disciplining the officers. Friends, family and supporters of the 14-year-old held a protest in front of Bridgewater Township police headquarters on Saturday to criticize what they say was racist treatment.

The Associated Press isn’t naming either youth because both are minors. 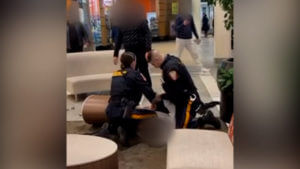 This image from video provided by Sienna Freidinger shows an incident in which a Black teen was held down on the ground and handcuffed after a mall fight with a white youth, who was directed to sit down on a couch at Bridgewater Commons Mall in New Jersey. (Sienna Freidinger via TMX)

The older teen told NJ.com his mother is Colombian and his father is Pakistani. He said he offered to the officers that he be detained.

“I don’t understand why they arrested him and not me,” he told the news outlet. “I say, that was just plain old racist. I don’t condone that at all.”

The Black teen’s family has retained civil rights attorney Benjamin Crump, who said in a statement last week that the youth “was no more of a threat to those officers than the white teen who fought with him. This is another example of the kind of racial bias that we need to root out of our system of policing.”