NASHVILLE, Tenn. (WTVF) — Ten years after a man was found shot to death inside a Nashville apartment, his killer remains on the run.

Metro Police say on June 18, 2012, a resident at an apartment complex located at 860 Murfreesboro Pike came home to find his front door was open. When he entered the apartment, he found it had been ransacked by burglars, and Marcio Murphy was found shot to death in the kitchen. Investigators say it is unknown if Murphy knew the tenant at the apartment.

A short time before, the apartment resident had been beaten up and robbed, and his keys were stolen. Detectives believe the person who robbed him later used the keys to enter his apartment.

No arrests have been made in connection to the burglary or Murphy’s murder.

“There are some people who have been identified as suspects in this case,” said Matthew Filter, a detective with the Metro Police Department’s Cold Case Unit. “This case was presented to the District Attorney’s office a few years ago, and the D.A. didn’t feel there was enough evidence at the time to ensure a successful prosecution.”

Filter said that in order for the investigation to move forward, police need anyone who was at the apartment complex when Murphy was killed to come forward with more details on what happened.

Murphy’s family is asking for the same thing.

“I just want anybody that knows anything about this case to come forward and talk,” said Chris Ganaway, Murphy’s godbrother. “I just want justice and closure.”

Ganaway said Murphy moved from Jackson, Tennessee to Nashville to live with him. He, unfortunately, got mixed up with the wrong crowd. 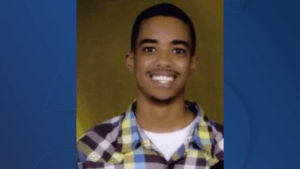 Marcio Murphy was murdered June, 18, 2012 and his killer has never been caught. (Photo courtesy of Chris Ganaway via WTVF)

Ganaway remembers Murphy as someone who was always cracking jokes and could make anyone laugh.

Four years after Murphy’s death, Ganaway organized a vigil in his honor in Jackson. He said his family deserves answers.

If you have any information about Murphy’s murder, you can call the Metro Police Department Cold Case Unit at 615-862-7803. You can also call Nashville Crime Stoppers at 615-74-CRIME.

This story was originally published Aug. 1 by WTVF in Nashville, an E.W. Scripps Company.