NASHVILLE, Tenn. (WTVF) — Seven years after a man was shot and killed in the driveway of his Tennessee home, his killer remains on the run, and his family is still waiting for justice.

Metro Police say on July 12, 2015 around 11 p.m., Michael Larson was shot in the back while in the driveway of his condo on Rockwood Drive in Hermitage. Witnesses saw two slender men in their early 20s take off from the scene, and a silver Pontiac Sunfire was seen speeding out of the area.

Michael’s mother, Betty, lived with her son in the condo and was just feet away from him when he was killed. 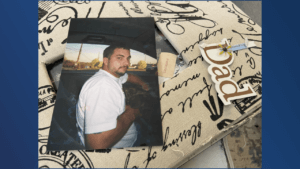 This photo provided by WTVF shows Michael Larson, who was shot and killed in 2015. (Photo by: Emily Luxen via WTVF)

“First thing I saw was two guns fire and hit Michael in the back,” recalled Betty Larson. “His last words were, ‘Mama move, they will shoot you too.'”

Betty said she has never recovered from the heartbreak of losing her son.

“There is so much he missed with his children,” said Betty Larson. “My life has never been the same, and never will be.”

Betty said Michael was outgoing, and had a kind heart. He was also a dedicated father to his two children and loved his family. She couldn’t imagine why someone would want to kill him.

“I don’t understand why someone would do that and just walk away,” said Betty Larson. “How does someone get to a point where they can murder someone and not worry about it?”

Metro Police said witnesses also reported seeing Michael get into an argument with a group of men in the driveway of his home the afternoon before he was killed. Detectives believe he was targeted, and that someone who was in the neighborhood at the time has information that will help track down his killer.

“There’s definitely a lot of people who could have seen what happened — or at least saw the suspects running away — and could give us a better description of them,” said Matthew Filter, a detective with the Metro Police Department’s Cold Case Unit. “Any information that you can give about what Michael Larson was doing before he was killed would be beneficial.”

Witnesses say one of the men who approached Michael was tall and thin with shoulder length dreadlocks, and the other man was short and thin. Detectives have never been able to determine their names and said tips from the public could help them get a break in the case.

Betty Larson also hopes someone will come forward with information. She said she has forgiven her son’s killer, but still wants to know who it was.

“I want someone to realize what they have taken from me and my grandchildren,” said Betty Larson. “I just need peace. I need closure, and the children need closure.”

If you have any information on who killed Michael Larson, please call the Metro Police Cold Case Unit at 615-862-7329, or Nashville Crime Stoppers at 615-74-CRIME.

This story was originally published July 11 by WTVF in Nashville, an E.W. Scripps Company.