NASHVILLE, Tenn. (AP) — A man who shot and killed four people in a Nashville Waffle House in 2018 had written Oprah Winfrey asking for help in determining whether his delusions that Taylor Swift was communicating with him through the Internet were real or not, according to testimony Wednesday.

Reinking is charged with four counts of first degree murder, along with other attempted murder and weapons charges stemming from the attack. Prosecutors are seeking a sentence of life in prison without the possibility of parole for the 33-year-old defendant. He has pleaded not guilty by reason of insanity. 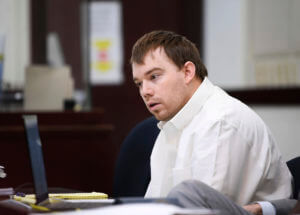 Travis Reinking sits in court while the jury wasn’t present during the third day of his murder trial at the Justice A.A. Birch Building in Nashville, Tenn., Wednesday, Feb. 2, 2022. Reinking is charged with four counts of first degree murder, along with other attempted murder and weapons charges for a shooting in 2018 at a Nashville Waffle House. (Stephanie Amador/The Tennessean via AP, Pool)

Reiking recounted to Winfrey attending a concert where he believed that Swift mouthed “Hello” to him during a song, according to the letter that Sumerel read.

After that, he wrote that he “started to notice that things I was saying were getting repeated back to me on the Internet.” Reiking also mentioned having a dream in which Swift loses her balance and then seeing a movie on Netflix where the lead female character asks a man to help her keep her balance, according to the letter.

Reiking also mentioned driving 1,000 miles (1,600 kilometers) to what he believed was Swift’s home in Los Angeles at her invitation only to find it under construction and abandoned. He also wrote that Swift stole some unnamed valuable intellectual property from him. And he wrote that Swift told him that he was gay and a transvestite, and that he would “have to hook up with a guy to see her.” 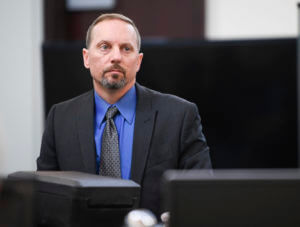 Detective Desmond Sumerel places the safe box by Travis Reinking in front of the jury to show what is inside in court during the third day of Reinking’s murder trial at the Justice A.A. Birch Building in Nashville, Tenn., Wednesday, Feb. 2, 2022. Reinking is charged with four counts of first degree murder, along with other attempted murder and weapons charges for a shooting in 2018 at a Nashville Waffle House. (Stephanie Amador/The Tennessean via AP, Pool)

Sumerel was the lead detective on the case and testified that he had not remembered the letters or considered them important to his job of proving that Reinking was the person who shot and killed Taurean Sanderlin, 29; Joe Perez, 20; Akilah Dasilva, 23; and DeEbony Groves, 21, on April 22, 2018. Also seriously injured in the shooting were Sharita Henderson and Shantia Waggoner. Kayla Shaw and James Shaw Jr., who are not related, suffered lesser injuries.

Defense attorneys do not dispute the basic facts of the case. Reinking was naked save for a green jacket when he opened fire inside the restaurant just after 3:20 a.m. on a Sunday. He fled, triggering a manhunt, after restaurant patron James Shaw Jr. wrestled his assault-style rifle away from him.

Prosecutors rested their case just before noon on Wednesday after presenting emotional testimony from witnesses and first responders. Several police officers teared up and said the crime scene was the worst they had ever encountered.

In order to prove Reinking was not guilty by reason of insanity, the defense will have to convince the jury not only that Reinking suffered from a serious mental illness, but also that his mental illness made him unable to appreciate the wrongness of his actions.

Prosecutors, hoping to prove that Reinking knew what he was doing, presented several witnesses who spoke of Reinking’s demeanor after his arrest.

“He was calm, quiet, relatively normal from everything I saw. He was doing everything that was asked of him,” Sumerel testified on Wednesday, echoing the statements of other officers.

Prosecutors also presented evidence that although Reinking was naked when he ran from the crime scene, when he was captured nearly two days later, he was dressed and carrying a backpack loaded with water bottles, sunscreen, a pistol and ammunition, a Bible and several silver bars.