NASHVILLE, Tenn. (AP) — Kayla Shaw was waiting at a Nashville Waffle House for her order to-go around 3:20 a.m. on April 22, 2018, when her life changed forever. A plate glass window shattered inward, the first warning of a man outside with a gun, she testified Tuesday.

In just a few seconds, Travis Reinking would kill four people and seriously wound two others.

Shaw took the stand on the second day of Reinking’s murder trial, after a riveting opening day of testimony in which witnesses described scenes of terror and bloodshed from the shooting attack.

Reinking is charged with four counts of first degree murder, along with other attempted murder and weapons charges. Prosecutors are seeking a sentence of life in prison without the possibility of parole for the 33-year-old defendant.

Testifying on Tuesday, Shaw said she had run inside the restaurant to pick up an order for herself and two friends who stayed in the car and saw the shooting play out. Shaw described her actions as surveillance video was played in court.

Inside, she waited at the counter while several people ordered, including Akilah Dasilva, who would be fatally wounded.

When the glass shattered, Shaw hit the ground, wedging herself between the stools and the counter. Reinking can be seen running in, naked except for a green jacket. He is carrying an assault-style rifle that he fires several times before James Shaw Jr. — who had taken cover behind a swinging door leading to the bathrooms — jumps on him, knocking him to the ground and wrestling the gun away. Shaw throws the gun over the counter and continues struggling with Reinking, pushing him out the door. 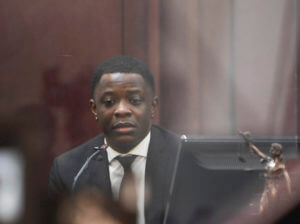 James Shaw Jr. sits on the stand, testifying during the first day of the 2018 Waffle House mass murder trial of at Justice A.A. Birch Building in Nashville, Tenn., Monday, Jan. 31, 2022. Attorneys for Travis Reinking, who killed four people in a shooting at a Waffle House restaurant, said Monday that Reinking believed the restaurant patrons and employees were government agents whom he had been commanded by God to kill. (Stephanie Amador/The Tennessean via AP, Pool)

Testifying on Monday, James Shaw, who is not related to Kayla Shaw, said that once outside Reinking used a racial slur, saying that Shaw had disarmed him. Reinking is white and his victims were Black and Hispanic. Reinking was captured nearly two days later.

Kayla Shaw testified Tuesday that she heard the struggle but did not look up. She never saw Reinking’s face. Once she heard others moving and talking, she ran toward the back of the restaurant, slipping on Dasilva’s blood and falling down. That’s when she saw the mangled, nearly severed leg of Dasilva’s girlfriend, Shantia Waggoner. She said a brief prayer before getting up again. Video showed her face contorted with terror as she reversed course and ran outside.

Waggoner testified Monday that after she and Dasilva were shot, she called 911 but got frustrated when they kept asking for an address, which she didn’t know. She then hung up and called her mother instead. Her sleepy, confused mother, at first thought Waggoner said she was taking shots of alcohol, which made Waggoner laugh, despite everything.

Shortly afterwards paramedics arrived and loaded Dasilva, her on-and-off boyfriend of seven years, onto a gurney. “Right before they carried him away, I just told him, ‘I love you’,” she said. Dasilva, who had been shot in the lung, couldn’t respond. It was the last time she would see him alive.

Also testifying Monday was Sharita Henderson, who had been sitting by the door with her friend and sorority sister DeEbony Groves.

Reinking pulled up and got out of his truck, killing Joe Perez and Taurean Sanderlin in the parking lot before entering the building.

“I remember seeing Taurean going outside to take a smoke break,” Henderson testified. “I didn’t see Joe at first, but as I looked out the window as the glass shattered, he turned to me and mouthed, ‘Play dead.’ So that’s what I did. Then he was shot in the head, and he died.” 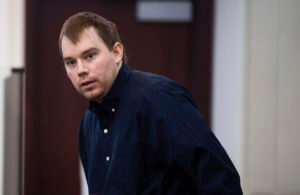 Travis Reinking walks into court looking around the room during the first day of his murder trial at Justice A.A. Birch Building in Nashville, Tenn., Monday, Jan. 31, 2022. (Stephanie Amador/The Tennessean via AP, Pool)

Henderson told Groves to get down and tried to get on top of her to protect her. Groves was killed and Henderson was shot three times and, like Waggoner, continues to walk with crutches. Henderson said she made eye contact with Reinking before he shot her, certain he could see her look of begging for mercy.

“He didn’t say anything, but he looked at me in the eyes, and he was determined — like he knew what he was doing and what he planned to do,” she said.

Reinking has pleaded not guilty by reason of insanity. That means he must prove not only that he was suffering from a severe mental illness but also that the mental illness made him unable to appreciate the wrongness of his actions. In opening statements Monday, defense attorney Luke Evans said Reinking was suffering from severe schizophrenia that had grown worse over the years.