NASHVILLE, Tenn. (AP) — Jury selection began Tuesday in the murder trial of a man who killed four people at a Nashville Waffle House with an assault-style rifle in April 2018.

Police said Travis Reinking, 32, was naked save for a green jacket when he opened fire inside the restaurant. Reinking fled after restaurant patron James Shaw Jr. wrestled the AR-15 rifle away from him. Hailed as a hero, Shaw likely prevented many more deaths, police have said.

After the attack, Reinking was ordered to receive treatment for schizophrenia in a mental facility. By October 2018, mental health officials had concluded he was competent to face charges in court. 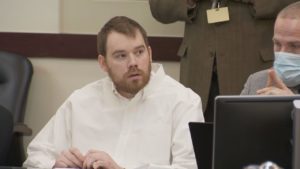 In this Jan. 24, 2022, photo, accused Waffle House shooter Travis Reinking appears in court as he prepares to go to trial for the April 2018 shooting rampage in Antioch, Tenn.. (WTVF)

District Attorney Glenn Funk’s office said in a court filing in January 2020 that prosecutors would seek a sentence of life in prison without the possibility of parole, but that is almost all that is known of the criminal case. Most records have been sealed and attorneys are under a judge’s order not to speak publicly on the case. Reinking has pleaded not guilty, but it is unknown how he intends to defend himself.

In Tennessee, as in many states, it is extremely difficult to prove a person is not guilty by reason of insanity. That’s because defendants have to prove both that they were suffering from a severe mental illness and that, because of the mental illness, they could not appreciate the wrongfulness of their conduct.

“That’s where cases break down,” said David Raybin, a Nashville defense attorney and former prosecutor who’s not involved in Reinking’s case. “If they do appreciate the wrongfulness of what they did, it doesn’t meet the legal standard for insanity.”

In addition, an insanity defense places the burden on the defendant to prove it with clear and convincing evidence. For most other defenses, the burden is on the prosecutor to disprove them, Raybin said. Reinking might try to argue that he should be convicted of a lesser offense than first degree murder, such as manslaughter, because he was acting with a diminished capacity due to his mental illness. That defense places the burden on the prosecutor, Raybin said.

Reinking was a crane operator with a history of erratic behavior prompting several run-ins with law enforcement, including with the Tazewell County Sheriff’s Office in Illinois, where he lived part-time. His behavior was so alarming that Illinois state police had revoked Reinking’s state firearms owner identification about a year before the shooting. But that only meant he had to turn over the guns to someone else with valid identification. Reinking surrendered the guns to his father, who later returned them.

According to incident reports, Reinking suffered delusions including believing singer Taylor Swift was stalking and harassing him, and hacking into his computer and phone. He also believed police and his family were part of the conspiracy, and his delusions dated to at least August 2014.

Reinking came to the attention of federal authorities in July 2017, when he was detained by the Secret Service after he ventured unarmed into a restricted area on the White House grounds and demanded to meet with then-President Donald Trump. It was shortly afterward that Illinois state police moved to revoke his firearms owner identification.

Reinking’s father, Jeffrey Reinking, has said he later returned the guns to his son because he did not believe he had the authority to keep them. Jeffrey Reinking was charged in 2019 with unlawful delivery of a firearm, a felony, for giving the weapon used in the shooting to his son after Travis Reinking’s stay in a hospital mental health ward.

Last month, Jeffrey Reinking waived his right to a jury trial on the weapons charge. The 58-year-old has been free on bond since shortly after he was charged. Several family members of the victims have sued Jeffrey Reinking in civil court for giving his son the weapon. Most of those cases are pending.

Four people were killed in the shooting. Taurean C. Sanderlin, 29, was a cook at the restaurant. Joe R. Perez, 20, had recently moved to Nashville for a job with his brother’s appliance moving business, according to The Tennessean. Akilah Dasilva, 23, was a rap artist and music video producer. DeEbony Groves, 21, was a senior at Belmont University majoring in social work.

Shaw, who wrestled the gun from Reinking, was one of the wounded. A bullet grazed his elbow and he burned his hand while grabbing the hot barrel of the rifle. Shaw has said he made a split-second decision to challenge Reinking. Once he got the gun away, he threw it over a counter. “It was hot, but I didn’t care,” he said. “It was life or death.”

Sara Burnett contributed to this report from Chicago.